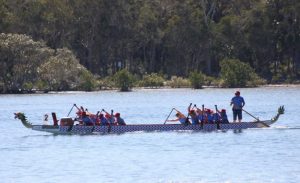 The Cooloola Dragons combined with Hervey Bay, Bundaberg and 1770 to compete at the Brisbane River Dragons Sports Regatta on the Kawana Waters course. The combined team was therefore named “Wide Bay Combo” and was very competitive against the more established bigger clubs.

The weather Gods were kind to us as the sun shone brightly and the wind blew very lightly. The Women’s 20’s team reached the final in the 500 metre racing finishing in fifth place. Well done to all those paddlers.

The Mixed 20’s 500 metre racing was also competitive but the team missed the final. In mixed racing teams are allowed to have 10 men and 10 women paddlers, but the “Wide Bay Combo” team only seated 3 men and 17 women. So again, well done.

The 10’s Open 500 metre racing again was competitive but we were up against it from the start as we could only seat 3 men and 7 women. All other teams mainly had the 10 men paddlers.

In a couple of weeks we will start intensive training to gain fitness and strength to be able to be competitive at the State Titles in February and Nationals in March.

Any interested new paddlers wanting to give paddling a go, it would be best to come on down to the Yacht Club hardstand on a Sunday at 7.30am. Sunday is usually a more relaxed and social paddle. We don’t expect new paddlers do the intense work which established paddlers are doing.

See you on the water!