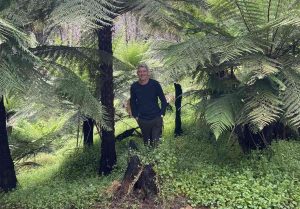 Our new local wood detective Phil amongst some tree ferns

I moved to Rainbow Beach a few weeks ago. I was drawn here like many of you by Rainbow’s stunning natural beauty.

Living on the Cooloola Coast it’s sometimes hard to imagine that a much darker reality exists in many other parts of the world, where there is wholescale destruction of forests and loss of biodiversity.

Such destruction is fueled in part by the trade in illegally logged timber, which is valued at a staggering 152 billion US$ per year; surpassed in value only by narcotics and counterfeit goods. Many countries have laws to prevent trade in timber that is logged from prohibited areas or involves wood species listed by the Convention on International Trades in Endangered Species (CITES, Appendix 1).

Some of these laws are Canadian Wild Animal and Plant Protection and Regulation of International and Interprovincial Trade Act; US Lacey Act; EU Timber Regulation; and Australian Illegal Logging Prohibition Act).  But the laws are (or have been) effectively inoperable because law enforcement has the hopeless task of seizing timber prohibited from trade and prosecuting criminals without the means to identify the wood species to a level of certainty required by a court of law.

In other words, how does law enforcement know that they have a timber that is prohibited from trade and not a look-a-like species? That’s the problem and to paraphrase Abraham Lincoln “Law without enforcement is just well intentioned advice”.

During my career I’ve acquired the much neglected forensic skill of being able to scientifically identify timbers. It’s a useful skill and I’ve been called upon in the past to identify wood for federal police, antique dealers, Bureau of Air Safety Investigation, National Museum, War Memorial and even the Prime Ministers Department (identification of the wood used to make Ben Chifley’s pipe holder, an icon of the Labour party)!

The approach I used in these cases was to examine the wood using a microscope or hand lens, and look for subtle differences, and identifying features, in the microscopic structure of wood.

But this approach can’t identify wood to the level of precision needed to separate the woods that are prohibited from trade by CITES, particularly tropical timbers like the rosewoods which consist of several species that look identical even under the microscope.

Rosewoods are rich red colored timbers and are in great demand for musical instruments, furniture and carvings: they are the world’s most commonly trafficked timber.

New far more sensitive forensic methods were needed to identify such woods, and thankfully they have emerged as a result of work I’ve been involved in at US Wildlife Crime Lab in Ashland, Oregon (the world’s only forensic laboratory dedicated to fighting wildlife crime), and the Canadian Environment and Climate Change Laboratory in Vancouver.

As a result, we now have the technology to identify timber with a degree of certainty that we could only dream of a few years ago. The technology is currently being deployed by US and Canadian Law enforcement agencies, and they are convicting criminals involved in illegal trade in prohibited timber species.

So what are these new techniques?

They don’t involve the analysis of DNA, which springs to mind when people think of precision forensic identification of biological organisms. Rather they share many features with the chemical techniques used at airports to detect explosive residues on checked-in luggage, or identify the source of oil contaminating beaches and marine environments.

Such techniques look for the chemical “fingerprints’” of explosives or oil. But wood is vastly more complex in chemical terms than an explosive or even oil.

The AI programs gradually get better at identifying the timbers of interest and eventually they are able to separate seemingly identical wood species with a high degree of precision. Recently, we have had great success in identifying different rosewood species.

The key to all of the new approaches to identifying timber is to have reference samples of woods whose identity is known in order to compare its authentic chemical fingerprint with that of the species under investigation.

These reference samples are blocks of wood generally collected in the 19th and early 20th century which reside in musky wood libraries called xylaria.

Row upon row of tan wood blocks sit on shelves in these libraries awaiting the moment when they will donate a small splinter of wood to help combat illegal trade in timber. Australia has 12 such xylaria.

Collectively these wood libraries have a wealth of specimens from Melanesia (principally from Papua New Guinea) and the Pacific islands, as well as Australia, making them indispensable to the protection of forests in our region.

But the collections are mostly neglected and reside in institutions that have failed to grasp their international significance. Equally disappointing is the lack of a coordinated effort here in Australia to deploy the exciting new technologies mentioned above that can be used to deter illegal trade in timber.

I’m hoping this situation changes (fast). I’m continuing my research and I am currently focusing on developing ways to identify and separate Fijian plantation mahogany from mahogany logged from South-American old growth forests.

The work is all consuming, but I hope I’ll still have time to enjoy beautiful Rainbow Beach!

The author is a Professor in the Faculty of Forestry at University of British Columbia (Canada) and Honourary Professor in the Department of Applied Mathematics at the Australian National University. He now shares his time between Rainbow Beach and Vancouver.