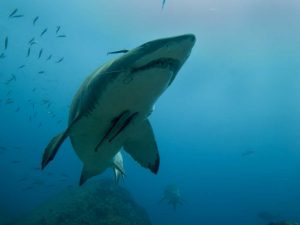 Sharks, manta rays and humpback whales have kept all divers entertained this month.

We are still seeing approximately a dozen sharks, predominantly male. Sadly, we have noticed about three sharks with hooks in their mouths that look quite fresh and can only assume they have picked them up just recently.

Since Wolf Rock has been closed to fishing for about ten years or more now, I think that surely these fishermen must know they are fishing in a green zone.

You might say that this is not really doing any harm to the sharks, however it’s the hooks that you can’t see that do the most damage.

If they have been swallowed they will be sitting in the shark’s stomach which can be piercing the stomach walls and leaving them open to infection which eventually kills them.

Since they are such a slow breeding animal each death is detrimental to their population.

Just like the dugong which used to populate the Great Sandy Straits, Hervey Bay and Moreton Bay in their thousands, so too were there thousands of the grey nurse sharks up and down the East Coast of Australia.

We can only hope that the protection the sharks now received between here and southern New South Wales will be enough to revive their population.

We’ve had some great visibility at an average of 15 – 20 metres and at one point about 30 metres which was fantastic! Water temperature is at its coolest for the year at 19 degrees.