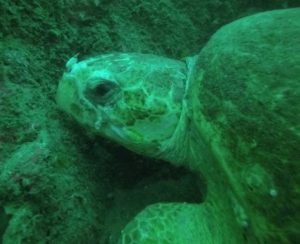 This past month we have been seeing record numbers of grey nurse sharks at Wolf Rock. The largest number we saw in one day was 75 individuals. As you can imagine, an amazing experience when you are surrounded by this many big animals.

At the same time on one dive we were also being rounded up by a huge school of barracuda. This went on for about ten minutes until we had to move up into shallower water.

As we move up into shallower water we then have the company of manta rays who are stopping at Wolf Rock on their migration north. We have several spots where they can drop in for a cleaning service by the tiny cleaner wrasse.

On just about every dive we are seeing a huge loggerhead turtle which we have named Lily. Lily must be about 100 years old; she has a barnacle on her nose and one big one on her shell.

But what makes Lily really stand out is the fact that she only has one full flipper left.  She is missing most of her hind flippers and half of her right front flipper, so we imagine she has lost these as a result of near misses with predatory sharks.

She is a very placid old girl and we usually see her on the surface getting some air or right down on the bottom where she puts her head in a hole and blends in with the rocky formation to have a sleep.