There is such an array of life under the water, so vast that we tend to forget about the ones that are maybe not so exciting to look at as they don’t actually move around like rays, fish and sharks or they may be harder to see as they might be hiding in crevices or under rocks or even in the sandy bed.  For example, you have all the hard and soft corals, anemones, sponges, sea urchins, worms, shrimps, sea cucumbers……just to name a few.  This month’s report is on sea stars.

Sea stars or “starfish” as most people call them come in a multitude of sizes, colours and shapes.  Most have five arms but some come with six or seven, or even up to eleven arms.  They might look soft and spongy but are actually very hard as they consist of a tough skeleton made up of a network of plates and spines with papillae which protrude through the skeleton on the upper surface and are used as gills for breathing.  Underneath they have suckered tube feet which are used for movement.  They can range in size between a few centimetres to as big as about one metre and their food sources consist of seaweeds, corals, worms and sea urchins amongst other things.  They reproduce two ways either by splitting in two and regrowing lost arms or organs, or they can mass spawn eggs.

Probably the most famous is the destructive crown of thorns sea star that is found on the Great Barrier Reef.  Fortunately we rarely see this one in our waters.  See photos attached of some that we do have here. 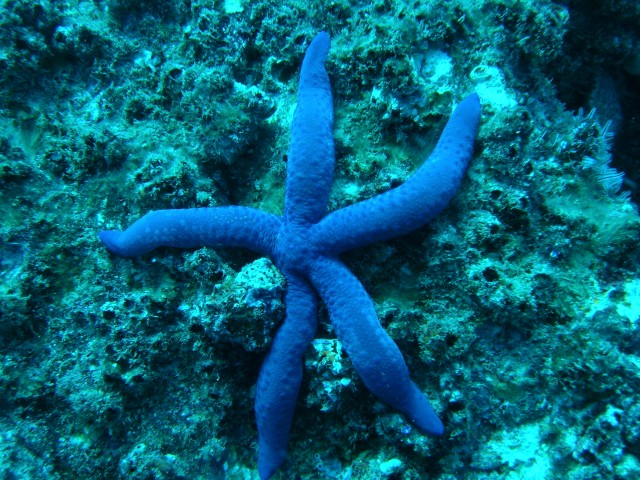 As of the 18 March, due to ongoing unsuitable weather conditions we have not been diving at Wolf Rock so far this month.  We do hope to get out over Easter however at the end of this month.