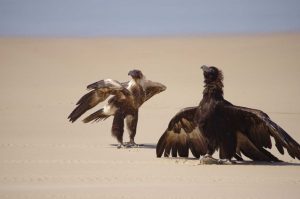 After winning ArtyBall prize last month, Garry Hewitt wins third place for the Flora and Fauna Category of the K’gari ‘Snap up Some Paradise’ Photo Competition!! His winning photo was the ‘Wedge-tailed eagles at Sandy Cape, Fraser Island’.

Garry won a prize hamper worth up to $100, full of goodies generously provided by the Queensland Museum, Queensland Parks and Wildlife Service, handicrafts made from K’gari’s Traditional Owners the Butchulla people, and a subscription to Wildlife Australia magazine.

His winning photograph will also appear in the Limited Edition Fraser Island 25th Anniversary 2019 Calendar as well as being showcased in the December 2018 Issue of Wildlife Australia Magazine. Garry is a regular contributor to the Community News and is now the Surf Club’s official photographer. Congratulations, Garry!