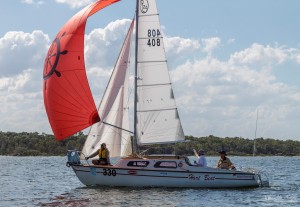 At the Tin Can Bay Yacht Club, Races 3 and 4 were held in a light south-easterly which provided many shifts on the windward leg, keeping the fleet busily tacking for better tactical positions.

The shifts in race 3 proved costly for the Commodore’s tri, Billy the Kid who ended up parked at the top mark, earning her a parking fine along with a few shillings for the swear box.

Meanwhile the leading Flying Fifteens, FAB and Bubbles exchanged the lead several times throughout the race with a photo finish of less than second between them at the finish gun, with Two Fish in third place.

In race 4, Bubbles and FAB were constantly duelling for line honours, with the former just skipping ahead with a more controlled spinnaker drop at the leeward mark.

Further back the largest boat in the fleet managed to stay in the groove to be the first RL28 over the line and earning her a handicap win.

Despite dire predictions from the WEC meteorological site, races 5 and 6 were held in brilliant 10 to 12 knot easterly conditions.

The start of race 5 was marred by the antics of Two Fish with her helmsman, Barging Bruce hogging the favoured end of the line, which cost Hartbeat and The Vibe a few anxious moments awaiting individual recalls and XLR8 yet another capsize.

Unphased by the melee at the start, Flying Fish took the lead and showed a clean set of heels for the whole course to take a well-earned win with Final Fling and The Vibe taking the minor placings.

Grimmo’s third new boat for the season cautiously took to water and, after a few early capsizes, showed a glimpse of her potential performance to come.

In race 6 the crew on Hartbeat (pictured) sailed a near flawless race to take their first win for the season. Second place was claimed by the twisted sisters on Topaz who managed to sail the course without any major tangles or mishaps to reclaim their past mojo.

XLR8 was sailed determinedly and managed to stay upright for the whole course to be rewarded with third place.

The final races for the summer season will conducted on Sunday 26 April and although FAB just needs to show up at the start line to win the series, second place will be tightly contested between Bubbles, Final Fling, Flying Fish, Billy the Kid and Two Fish.

The club is hosting several major regattas in the near future, with the Bay to Bay Trailer Sailer race on May 2 and 3, John Moffat Pharmacy sponsored Cocky Cup on May 10, and the Cooloola Cup on May 23 and 24, which is an open regatta for all-comers.

The club’s current Discover Sailing course, aimed at introducing basic sailing skills, continues through to the of end May with the next series due to start in October. For further information please contact Jon Jones on  54864014.