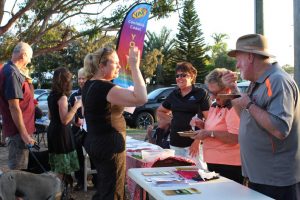 The stalls were well received – a big thank you to all the community groups!

What a evening! We organisers were absolutely thrilled with the event – where expected numbers were blown out of the water and we were told people loved it.

I had been reporting on ‘Welcome Dinners’ for Maleny and Montville – run by their Lions Club in our other newspaper, the Hinterland Times.

The events invited new people to meet community groups, businesses and help them settle into their new community.

What a great idea.

Heatley and I wanted to sponsor the event here, but it wasn’t until we were both freed from P&C duties that I felt I had the headspace to make it happen.

As soon as we broached it at Rainbow Beach Commerce and Tourism, hands went up and a date was set, and the Community Centre also came on as a sponsor.

And what a team! Fiona Worthington organised all the wonderful food donations, dishing out prawns from Ocean Breeze Seafoods. Did you taste the Asian delicacies from the Surf  Club?

Darryl from Rainbow Beach Meats supplied the kebabs and snags, and Jilarty’s curries were popular – one resident told me it  reminded her of Mindil Markets in Darwin – the relaxed atmosphere, variety of cuisine and live music.

Through the newspaper, we linked to the many wonderful groups from across the coast who work so hard in our communities.

Suzie Faulkner worked with Rainbow Beach Realty and Cooloola Coast Realty – our link to all the new people to town.

Barb Rees made sure we crossed all the t’s with Council for the event and handed out the gorgeous Boomerang Bags on the night.

Shane Mahn and Ross Brown from the Community Centre were also invaluable, as were the RBCT men on the bar.

Committee member Nigel Worthington (who also suggested the event name) said, “It was one of the most successful events we’ve had – I don’t think we’ve raised that much money in one afternoon before.. we didn’t really expect to make that much.”

And the results? You need to let us know.

BJ Parton said she had eight new signups for Aquarobics, undiscovered talent Elise Parton had a booking for a gig (Tina Goodwin also provided such beautiful music, fire twirling, drums and “casual vibes”), and another stall holder was really pleased we hosted an event where children were included.

Sarah Booth from RBSS Fitness Club and Sarah Brantz with Rainbow Beach Playgroup both kept those kids entertained, as did our fantastic playground.

We would love your feedback – suggestions for improvement and what you really liked about the event (also if you received much interest in your group).

Thank you everyone who helped make it happen, all the businesses, community groups and services, and community members who welcomed our new residents.