Home  »  News   »   Where are the funds and timeline for bridge upgrade? 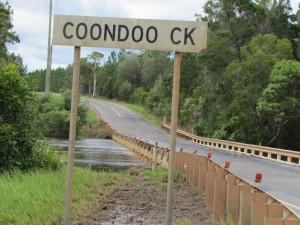 Cooloola Coast residents deserve to know where the funds and timeline to upgrade the Coondoo Creek Bridge are.

Member for Gympie, Tony Perrett, said that he has written again to the Minister for Transport, Mark Bailey, seeking financial support for the bridge upgrade and approaches on the Tin Can Bay Road to a 50-year flood immunity level.

“The Minister said he supports the project but keeps ducking the funding issue,” Mr Perrett said.

“If the support is real where are the funds and the timeline? The only timeline we have is of creative ways to avoid fixing our bridge.

“Everyone has seen some preliminary vegetation clearing, and that the speed limit has been reduced to 60 kph, but nothing else. Residents of Cooloola Coast and Gympie are being kept in the dark.

“Even though the Federal Government isn’t responsible for the road, it committed in August $5 million towards the upgrade.

“This is a State Government road and we need to know where the State’s $10 million share of the project is. Everyone wants to know what is going on and where is a genuine timeline.

“In February we were told that nothing specifically was allocated because the government hadn’t secured Federal Government funds and that it would be considered in the future against ‘competing priorities and availability of funds.’

“In the June Budget there was no mention of the project. Later that month we were told that the State would apply again for Federal Government money.

“In September the Minister said he supported the project only after Canberra had committed $5 million. I have written to the Minister because residents are waiting and there is still no timeline and no funds.

“The current low-level timber bridge is the only link between the Cooloola Coast townships of Tin Can Bay, Cooloola Cove and Rainbow Beach with Gympie.

“I advised the Minister that there is no alternative route and that the bridge frequently closes during severe weather events, cutting off both the Cooloola Coast, and those evacuated off Fraser Island, from Gympie.

“The crossing is prone to flooding during extreme weather events, making it impassable for days and cutting off residents, local forestry workers, Laminex factory workers, school and town buses, as well as inter-city coaches.

“An upgrade is critical to improving safety for motorists and boost flood immunity for the region,” he said.