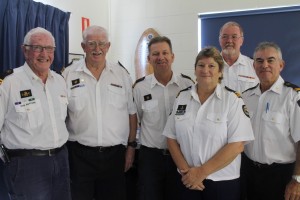 Congratulations to the new team at AVCG Tin Can Bay!

Mayor Mick Curran and Cr Mark Mc Donald recently paid a visit to QF17 base to discuss short and long-term plans, with the goal of better servicing the needs of the community. Ongoing consultations are planned to best make use of resources, manpower and expertise of both groups.

A recent spate of emergency call outs have again reinforced the need for mariners to communicate with the Coast Guard when attempting crossing the Wide Bay Bar, or venturing even short distances. Fortunately, no fatalities resulted but these people can consider themselves very lucky.

Coast Guard attended an EPIRB notification and recovered a yacht which had overturned on the WBB, with one very lucky man still on board after much of the superstructure and mast were washed away.

Mid-June, a camper at Inskip Camp Grounds phoned the base and reported a vessel overturned and people in the water in Fisherman’s Gutter in rough conditions! Luckily a crew was at hand, due to a regularly scheduled training session, and the training morphed into an actual emergency with lives at risk.

Again, fortunately for the mariners, a message was passed onto QF17 and acted upon swiftly.

Why people don’t contact the base via radio or phone before they need us is anyone’s guess. It doesn’t cost anything and the possibility of advice from the radio operator could have avoided the situation.

Current Bar conditions or even proper course to take could have saved stress, damage and money for those concerned.

Finally, a compulsory re-fit of our primary rescue vessel, Cooloola Rescue 2, will commence in 2016. Approximate costs are initially $350,000 “depending on what more the surveyor finds” and now is the time for the community to show its support for our volunteer service.

Raffles, including a trailer complete with BBQ and $1650 worth vouchers from Bunnings, boat trips and just plain old-fashioned shaking of the buckets, will be seen around the district for the next year at least. So far we only need $225,000 more. Watch this space.

Available now are the newly formatted Tide Guides, adjusted to WBB and TCB, which can be purchased at RB Hardware, Camping and Fishing, The Boat Place Goomboorian, Ross Creek Store, and TCB News, along with TCB Chandlery and of course QF17 at Norman Point.

Remember, always log on. It makes things so much easier!