We are tourist towns. Rainbow Beach welcomes backpackers and many businesses rely on their trade.

However, we have travellers – mostly international, and mostly in campervans – who choose to stay and not pay.

Our community is divided on this issue. Some locals have been putting up with it for years, looking at lines of laundry drying in our public parks and people breakfasting in car parks on the beachfront.

Local Tony Stewart was appalled to find rubbish near the school gate, when he was out walking the dog last month. He had noticed a car there the night before. He said, “Some rubbish had blown away or been taken by crows. I went back and picked most of it up.” 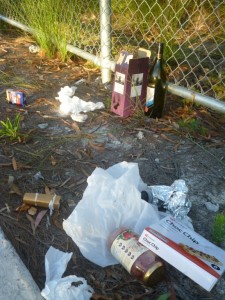 But he didn’t have gloves to collect the excrement he could smell over the fence. Not a pleasant thing for a walker or school staff to deal with.

Other councils fine the campervan hire company (not the individuals) and it seems this could be effective for tackling most unwanted campers.

The grey nomads, or freedom campers, in self-contained vehicles are another story. Tourism bodies and RV Friendly Towns lure them into their districts to spend and play.

As council prepares to tackle the issue again, we asked for your feedback on Facebook:

What are your thoughts on illegal camping by the backpacker campervans, and also on “freedom camping” by self contained RVs and caravans?

Paul Vick I can’t see a problem, as long they clean up after themselves.

Meaghan Bentley I don’t have a problem with it either, as long as they clean up after themselves. I think there should be more free camping.

Dannielle Wright I used to live along the street that the park and skate park is on and it wasn’t really nice coming out on the veranda in the morning to have a cuppa and see some guys across the road weeing in the trees next to the park or brushing their teeth and spitting it out in the gutter. Pretty gross. Part of me says yes, if they are clean and respectful then let them be, but another says if they can’t afford to pay $6 a night and park in Spectrum where they have amenities or for a permit for Inskip then maybe they shouldn’t be travelling…

Camille Nash I think it’s a problem, because if it’s okay for one then it has to be okay for all. There are campgrounds for a reason. Unfortunately from what I’ve seen, the majority do not clean up after themselves. They come here because it’s a beautiful place but then they leave rubbish everywhere.

Tin Can Bay Tourist Park There happen to be perfectly fine tourist parks that can cater for our travellers. Our cheapest non-powered sites are $25–$35 – they have access to our amenities (showers and toilets) laundry, pool and free wifi.

Kirstie Morris-Jordison I have always felt a grassed camping area a little closer to town would be a way to eliminate illegal camping in car parks. Inskip is amazing, however it is predominantly sand and is a fair way out. The travellers in question don’t seem to have the funds to stay at the caravan parks or resorts, however they are happy to obtain permits generally.

Wayne Mifsid Just imagine if the two van parks weren’t there and all campers did this. Would you be asking that question?

Kerry Leyland I don’t like the fact that they are not cleaning up after themselves and not using amenities especially where there is play equipment for kids. I don’t have a problem with designated areas for free camping and I do believe that Rainbow should have more considering we are a tourist destination.

Alicia Prentice-Shields I don’t think it’s a problem just as long as people clean up after themselves and be respectful of other people.

Jess Cochrane It is not right. There are caravan parks, backpacker hostels and Inskip point to camp at. If they cannot afford to stay in these facilities then they should not be travelling in the first place. If they want free accommodation they can stay further out at free camp zones. They do not clean up after themselves, nor is it pleasing to see them sitting outside having breakfast at 10am. A minority tarnishes the name of all backpackers. Ones that free camp do not spend or contribute to the economy. They bring their supplies in and leave after the obligatory Fraser trip. It is illegal to camp in the street and it should be enforced. They use the facilities that the campgrounds have while patrons pay for them, or they use the beach showers. Why should they be able to camp on the street and use facilities/hot water for free by sneaking in?

Raewyn Marjorie Oliver Rot, who wants to pay for one night when you can share this lovely view for 24 hours ONLY.

Jenni Eising There are caravan parks, backpacker hostels. If they cannot afford to stay in these facilities then they should not be travelling in the first place. If they want free accommodation they stay further out at free camp zones. Be fair to others and stay at the parks.

Stephen Douglass Why is it illegal to be free to camp? Clean sites…Make a mess…then pay a fine. We were all young once…And as we retire we want to be young again…

Ben Fawthrop I agree to supporting our local businesses but the price of camping is ridiculous. Hostels charge $25 per night for an air-conditioned room, free wifi, pool etc yet you pay the same for an unpowered site to wake up in a hot campervan. The vans are destroying the tourism industry because they are free rolling. But at an average of $55 per day for rental, that’s the same as two people for a night in a hostel. Rainbow Beach needs backpackers, but we also want to keep our streets clean.

Cliff Shaw Have designated areas with bins and facilities on outskirts of towns that are patrolled, with fines issued if people do not comply. In saying that they wouldn’t pay anyway…so what do you do…I was at at Agnes water when all parking bays taken up by ignorant backpackers in their vans…also in the floods two years ago they were getting free handouts of clothing and food in Bundy…Don’t get me started.