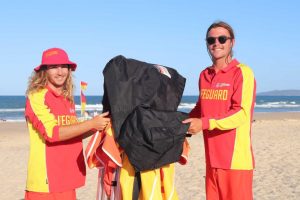 Local boys, Eric Lawton and Nicholas White, had a summer of fun, keeping our beaches safe

Two local lads, spent their summer on the beach like many other youngsters. Except with a catch – they were paid for it!

Meet lifeguards and mates Eric Lawton (20), on university holidays and Nicholas White (18), on a gap year after finishing Year 12 in 2017. They were educated at Rainbow Beach State School and Gympie State High School, and for both, it was their rookie season of lifeguard work.

Nic said it was even better than he expected: “It was the best gig and an awesome crew to work with. I learnt a lot, met heaps of influential people, it couldn’t get much better.”

Eric agreed, “The season went really well. It has been busy and I’ve enjoyed helping people and passing on some knowledge, as well as learning from the other boys I work with.”

Nic said, “I can’t pick a best moment. It’s a really good feeling talking to the public and answering their questions and giving them the local knowledge I know, to help them out. Helping anyone in any way gave me crazy satisfaction.”

You can’t underestimate the value of that local knowledge. These boys have surfed, fished and dived our waters since they were tiny. But to work as a lifeguard – they really need a broad range of skills, from driving to using the jet ski, and first aid and rescue skills necessary in a more remote location.

When asked for a ‘worst moment’ Nic’s response was, “Honestly, I can’t fault the job!” But Eric admitted, “Probably driving the Freshwater track most days!”

Most of us can sympathise there, especially in the busy summer holidays. However, being paid to spend days up at Double Island Point, a favourite location in the world for many of us, is worthy of our envy.

Both were rostered five week days and had weekends off, alternating every few days from Double Island Point to Rainbow Beach.

They thanked the crew, and locals and tourists, and hope to patrol next Christmas here.

Eric is back to the University of the Sunshine Coast, where he has almost completed his ecology degree. “I’ll keep working holidays and picking up shifts wherever I can in Rainbow and possibly some other places.”

“I couldn’t imagine working a better job,” said Nic. He also hopes to keep working as a lifeguard this year in Rainbow Beach, if the job allows it, “If not I’ll try apply for a few lifeguarding positions down the coast.”

So what do these two lifeguards do on their weekends, and after work? Working on the beach all day, wasn’t enough. They were back surfing, every chance they had!