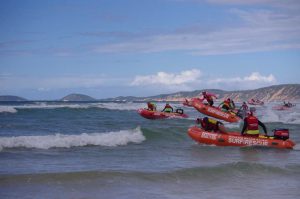 Rainbow Beach recently hosted Round 4 of the ‘Ocean Roar’ IRB Premiership Series. Beach and Club President, Shane Handy, said despite the conditions the event was a great success.

The carnival saw 259 competitors from 16 clubs across Queensland from Coolum Beach in the north to Kirra SLSC in the south compete.

This year drones were launched to monitor rips and other surf conditions, marine life such as sharks, and spot swimmers in distress, plus they have also proved a valuable resource in surf sport, aiding safety efforts and judging.

A fantastic event on the Rainbow Beach calendar.