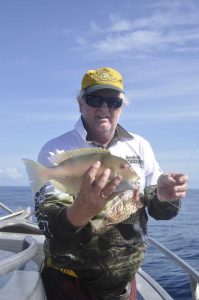 The mangrove Jacks that were feeding so aggressively a month ago during the hot weather have become elusive now the weather and water temperature have cooled down a bit. The strong winds from the cyclone made fishing nearly impossible for more than a week giving an opportunity for a bit of boat and fishing gear maintenance.

The bream, whiting and flathead have been a bit hit-and-miss lately with only occasional good catches. The mud crabs seem to be less active than they were, but I guess that you can only catch and eat them once and the last few months has seen exceptionally good catches.

There are a few squid around to be caught by those who are putting the time in to find where they are on the day. There have been moderate catches of reef species when the tide and wind allow fishing on the ledges and reefs.

There has been quite a few nannygai caught on the inside reefs lately but be aware of the legal size. Large schools of fairly big tuna have been seen actively feeding on the bait fish around the Inskip and Big Mick area, this activity should increase as the weather cools.

There seems to be increasing numbers of turtles not only in the deeper channels but also in the creeks, so be on the lookout while traveling as they can be difficult to see, particularly if the water is a bit choppy. The squid are now getting to a quantity worth targeting.