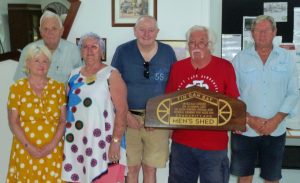 The Tin Can Bay Community and Men’s Shed has been forced to close down until current restrictions have been lifted.

But it won’t stop the Shedders from communicating and looking after each other, just not “shoulder to shoulder”.

We are continuing the ‘containers for cash’ collections. There is a bin located at the front of the Shed for drop-offs, and volunteers are working behind the closed doors, one at a time, to sort and bag them.

Plenty of gloves and sanitiser on hand (pun intended).

A new Committee of Management was elected at the Annual General Meeting on March 14. The new President, Robert Jones, thanked members for their support, and promised that the coming year would see the Shed develop into a facility that the Cooloola Coast could be proud of.

The Shed has a number of projects on hand involving repairs to furniture and similar household items. This type of service is available to the general public as well as Shed members.

The Shed will pick up where it left off as soon as we are able, with planned classes on knots and splicing, computer and internet training, and scroll saw operation.

We are down but not out.