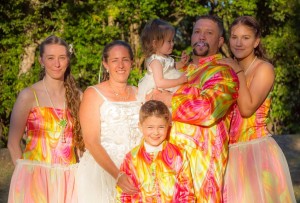 Congratulations to Tania Jones and Clay Preston who were married on the very busy Saturday of the Nipper’s Carnival.

After the couple arrived in Scott Fitzgerald’s Chevy Chevelle, they exchanged vows under the two pine trees overlooking our beautiful beach, in Laurie Hanson Park.

All four kids were in the bridal party, including older daughters from Coffs Harbour and Brisbane.

Over 80 people attended the reception at the Rainbow Beach Hotel, where Clay works as a sous chef.  You’ll know Tania from scooping ice-creams at Crème de la Crème.

“A lot of staff couldn’t come – they had to work, but joined in later,” said Tania.

“When we planned the wedding we didn’t know it was the Nipper’s weekend. But it went well, there were no problems.”

In fact, they had so many comments about the pub the couple thank Simon Vicic, as the food was loved by everybody, and his wife, Renae, and John Albert Harper for all the work that goes into a wedding function.

They are planning a South Sea Island honeymoon in our quiet season, February or March – with kids!