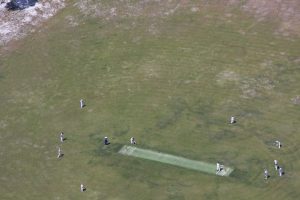 Although it is amazing to see Rainbow Beach Cricket Club play from the sky, (taken from Rainbow Beach Helicopters), the local cricket club encourage spectators from the ground too!

Captain Merv O’Neill from Rainbow Beach Cricket Club reports they are having a reasonably good year: “We have played eight games we’ve had two washouts, two losses and four wins. Two one-day games to go, and only lost one, so I’m hoping we’ll stay on the top of the table. We would like the chance to defend our one-day title.

This is followed by the Gympie Colts two one-day and two two-day games, and the last game of season is on February 3 and 10, 1pm against the Harlequins, another Gympie side.

There are five cricket teams in the competition and the other four teams are from Gympie. Hopefully we will make the one-day final and the final on January 21 in Gympie at 9.30am.

There have been a few new inclusions this year and we are always keen to encourage more men and women. Everyone’s welcome – spectators too! Call 0418 666 140 to find out more.