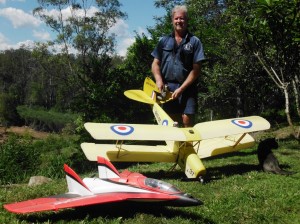 Old and new: Nic Case does some maintenance on his Tigermoth ready for May 3 and 4

Recent rains have made field conditions perfect for the TCB Model Flying Club to host its annual Warbirds event on May 3 and 4.  The skies over Tin Can Bay will be filled with miniature Warbirds on the15th anniversary that the Club has held the event, beginning back in 1999.

This magnificent event put on by the Tin Can Bay members is the pinnacle of all Warbird events held each year across SE Queensland. It is also one of the few events that is held under a Public Display Permit which allows the Club to invite the public to come and see the spectacular machines up close.

The Southern Cross Air Force (Warbirds) was formed in 1998 by a group of individual enthusiasts enjoying the sport of building and flying miniature radio controlled Warbird aircraft. In 1999, a number of SE Queensland clubs including Tin Can Bay were contacted to see if they would be interested in hosting the Warbirds association. Without hesitation our Club jumped at the opportunity and, to this day, we still enjoy the Warbird members annual visit.

A  Warbird aircraft is a model of any aircraft used for military purposes by any country at any time.  It must be a scale or semi-scale rendering and marked accordingly.  It also includes any prototype aircraft, scale military helicopters, drones and jets.

So make sure you head out to the flying field and experience the romance of aircraft from a by-gone era as well as some more modern machines.  We expect over 60 pilots and 120 plus planes, so there will be a good show put on. Mornings are the best time for viewing.