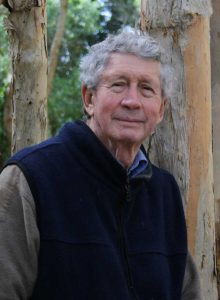 Happy 80th birthday Walter! As a surprise, family and friends conspired to put you in the local limelight, telling me, “Not many Rainbow Beach people who reach 80 have had the vast experience and accomplishments that Walter has in his lifetime.” Also described as “wonderfully humorous with a great sense of the ridiculous”, a “closet poet”, it is unusual that this globetrotting award winner is also a very humble man.

Watch Grand Designs and you see inspired buildings growing over an episode, but for architect and planner, Walter Dobkins, this has been his life’s work.

Practice Manager and wife Vyvian penned a heartfelt dedication to Walter in his book, The Quiet Architect, and said, “I have lived in six houses designed by him; two in Lusaka Zambia, two in Adelaide and two in Rainbow Beach. As in all of them, they are full of light, unexpected views and simple finishes. I get a good feeling every time I step through our front door.”

Local Betty Freeman said, “He’s remarkable – the way he takes into consideration your ideas to incorporate it into his designs. He can envisage what you want.”

She described him as ‘old school’, “All of his plans are done by hand, every time we made a change he had to redraw the whole plan.”

It is no surprise then that “incredible patience” is also a quality attributed to Walter. A useful trait when your preferred practice is “A,B,C…. a constructive interaction between Architect, Builder and Client”.

Walter also designs in harmony with his environment. They moved to Rainbow Beach in 2000, drawn by the retention of natural vegetation in the Shore’s development, and a neighbourhood with houses designed by a few of Queensland’s highly respected architects.

Walter said in his 2011 book: “We were attracted here because it seemed a magical place to retire and hoped it would give me the opportunity to contribute as an urban designer to a delightful undeveloped seaside town, before inevitable pressure for entrepreneurs searching for development opportunities altered it forever.”

Far away from Queensland, Walter was born in Zambia, then educated at Cape Town University and Edinburgh University.

In his professional life, he has worked as an urban planner in Lusaka on squatter upgrading and designing mining townships, in private practices, and five years in Alice Springs, where he was the first architect employed by an Aboriginal organisation.

Said Vyvian, “We’ve lived in many different parts of the world as he pursued his studies, professional work and academic life. The different climates, building skills, client’s needs and budgets have influenced the way he designs.”

Now a grandfather, he was also a modern father, said Vyvian: “Running an architectural practice from home meant he was highly visible at the drawing board to our two daughters, who only later realised their father ‘didn’t go off to work’ like other dads.

“His university teaching in Edinburgh, Adelaide, Canada, Denmark and Papua New Guinea, provided a rich source of inspiration – learning from your students and ‘questioning their designs make you question your own’.”

As for a mantra, Walter believes building a house holds many challenges, “the architect seems destined to look for opportunities to take these to the ‘cutting edge’.”

It seems that this ‘quiet architect’ should be rightly proud, balancing innovation with his clients’ needs, and winning  awards for his designs along the way.

Whilst teaching in Vancouver in 1987 he was asked to design a banking and office complex, Meridien Bank, in Lusaka.

Vyvian recalled it was in 1995, “His old professor came to visit us in Lusaka and I asked is this building good enough to enter the RAIA International Award?  He said, ‘of course it is’.”

However Walter has always been reluctant to seek professional recognition, “So, between us we put together the photos and drawings and he won!”

He also won two triennial awards in Zambia for two of his house designs before migrating to Australia, and ‘ 2009 Best Beach Holiday Accommodation’ by Queensland TakeaBreak for the “Strandhaus” in Rainbow Shores.

Walter is best known in Rainbow Beach for the Sunshine Coast Regional Architecture Awards shortlisted Community Centre and Library complex, where he fittingly came full circle near the end of his career to design the hall with one of his ex students from Adelaide.

Add onto that twelve houses in Rainbow Shores and others in the main town, along with houses in Wallu, Gympie and Brisbane.

In his book, Walter explains, “Once constructed, the building just becomes contiguous in its setting. Its form and many details lose their clarity and the importance one gave them.

“There remains in the architect’s thoughts the ‘might have been’ and the hope it will be well looked after, appropriately landscaped and that the clients are happy.”

Vyvian said there is a definite advantage to that, “The best part is unlike most architects, because his clients in Rainbow Beach have become our friends, we frequently spend time inside the houses he has designed.”

She added with a smile, “With over one hundred buildings designed in fifty-five years of practice and pencil in hand, he is not ready to retire yet!”

Thank you to Walter’s family, Betty Freeman, Coral Johnson and Michael and Anthea Stevenson for your assistance with this story.