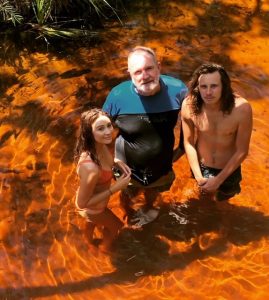 Al with his “two beautiful children” Ashlee and Harri Young

Loved dearly, respected highly and admired for his calm, caring manner, Al Young was a fine human being.

Al was the second eldest child to May and Don Young. Many family stories would tell tales of the three larrikin brothers caught up in entertaining escapades, whilst the eldest sister’s role held more mundane responsibilities!

His sense of family was central to his life. Family came first, second and third always. Al supported his extended family at all times. He was the most hands-on dad with his own precious children, Ashlee and Harri.

Al also valued genuine friendships. His mother May had a profound influence on Al’s life values. She was an ordinary woman with extraordinary warmth, practicality and intellect.  Traits her son shared.

Al pursued a plumbing trade at the age of 15 and continued in this work area for 20 years.  He then trained as a secondary school teacher specialising in workshop subjects, including design and technology. He was a versatile teacher also interested in Special Education.

Al worked in this sector of teaching at Emerald State High School, Gympie Special School and The Flexible Learning Centre in Gympie. He was an innovative teacher and became the district winner of a ShowCase Award for Excellence in ‘Curriculum Design-Improved Student Outcomes’ whilst on staff at Tin Can Bay School.

However, Al’s priority as a teacher was to be the most effective mentor for all students. He was held in high regard by his teacher colleagues over his 25-year teaching career.

When asked what his greatest achievements were Al, without hesitation, answered “my two beautiful children”.  As a ‘proud as punch’ dad, Al carried out parenting tasks with a minimum of fuss. He parented with loads of love, buckets full of guidance and endless laughs. Ashlee and Harri have such a solid grounding which will warm them and steer them through life.

Al’s interests were many and varied. He loved the pounding surf; he was often a frustrated fisherman; he got lost in music and explored visual arts techniques. Al respected and researched flora and fauna in our quiet corner.

Travel interests took him to many parts of Australia in his youth, as well as living in New Zealand. More recently he travelled to the UK and France. History was a major focus on his travels. History, exciting food and good wine!

Al’s community involvement in his early days in town was in surf life-saving patrols. He then took on the training of the younger turtle or green-capped Nippers for a number of years. He was passionate about encouraging water safety and developing early interest in life saving.

Al supported the Rainbow Beach P&C and later, at times volunteered in the classrooms. His other community involvement was as an assistant coach over many years, with the Golden City Soccer club.

Finally, I know that Al was incredibly thankful to close friends and family for their support and their helpfulness during his debilitating ill-health.

So now this witty, warm, wonderful human being rests peacefully.

“And so, Al, forever in our minds and hearts, we see you in every wave.”