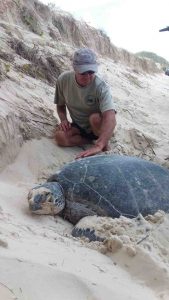 Cooloola Coastcare volunteers have conducted the first ever ‘Turtle Nesting Census’ of Rainbow Beach from December 17 to 31, 2020, as part of the Queensland Turtle Conservation Research Program.

This census happens every night for two weeks on turtle nesting beaches on the mainland and islands all over Queensland at the same time each year, to monitor the population of endangered and vulnerable species including the loggerhead and green turtles that nest here on Rainbow and Teewah beaches.

Heading out on Christmas night shows the care and dedication of these wonderful volunteers.

A fantastic effort of patrolling the beaches from Inskip Point to Mudlo Rocks was made by over 40 volunteers including Coastcare members, community volunteers, families with children, holidaymakers, people visiting family and friends, day-trippers and campers (volun-tourists) who joined the coordinator and the certified TurtleCarers.

They averaged 12 hours per volunteer, racking up over 490 hours between them.

Although there were several reports of turtles on Teewah Beach and Double Island Point areas, there were only tracks and no sightings or nesting events to witness on Rainbow Beach during the census period, making this an even more mammoth effort for all those who ventured out at night to do their bit for turtle science despite no reward of a nesting event to watch.

Gary Swanson, our trained Turtle Tagging permit holder, responded to a call from the Rangers about a daytime turtle sighting at Double Island Point.

He tagged a huge 120cm green turtle, the first turtle ever to be tagged on our beaches.

Assisted by Murray Sambell and Joan Burnett and watched by hundreds of holiday makers, it was a very special event. Anyone with photos can email them to Coastcare.

TurtleCare still needs help walking the beaches at first light looking for tracks which continues until the end of March as the nesting turtles come back every two weeks to lay another clutch of eggs.

Follow the action on the FaceBook group ‘TurtleCare Rainbow Beach’. Report tracks or nests by text to 0434 281 352 and email photos to Turtlecare@CooloolaCoastcare.org.au

This research was made possible with the support of a Queensland Government Citizen Science Grant.