Home  »  Community   »   Tracey’s life of continuous adventure in the Navy 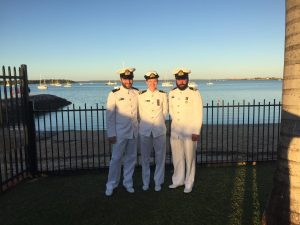 Former Tin Can Bay local, Tracey Magyar, loves her life on the sea

After school, Tin Can Bay local, Tracey Magyar decided to study Oceanography at university, but soon realised she didn’t want to spend her life in a science lab.

She decided to join the Navy in 2015 as a Maritime Warfare Officer, training for two-and -half years and serving in HMA Ships Arunta, Launceston and Benalla. She has opted to stream in Hydrographic Surveying, however is currently taking a break from the branch to navigate Sail Training Ship Young Endeavour.

The Young Endeavour was a gift to the Youth of Australia in 1988 and has served as the platform for the Young Endeavour Youth Development Scheme since being gifted. Young Endeavour has enabled thousands of Youth to ‘Expand their Horizons’ through sailing, navigation, climbing and teamwork.

“Working on the Young Endeavour is one of the highlights of my Naval career. Being a part of the Youth’s development and watching them grow is extremely rewarding,” Tracey said.

Tracey’s upbringing in the Cooloola Region facilitated a strong foundation for her future endeavours. In particular, her involvement in organisations such as Tin Can Bay Yacht Club and Rainbow Beach Surf Life Saving Club.

“I wouldn’t change growing up in Tin Can Bay for the world. I thrived in our small-knit community and am very grateful for the opportunities I had and the long-lasting friendships I made.

“My parents have always been incredibly supportive of me and my sister, encouraging us to work hard to achieve our goals. I’ve had many influential people in my life, one of which is Brian Perry, former owner of Hervey Bay Whale Watch. He never doubted my abilities and played an important mentor role as I transitioned from recreational boating into the marine industry.”

Although she never thought she’d join the Defence Force, she doesn’t regret her decision and loves that her life is one continuous adventure.