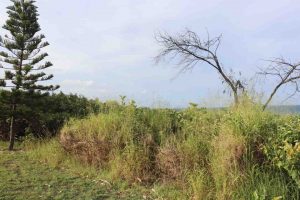 The Community News received this from Dave Tardrew last month who asked Council:

Can you please advise if and when mowing of parks will resume? Given this is the busiest Rainbow Beach has ever been it is a very poor reflection on Council that parks continue not to be mowed. In all areas very unsightly and up to 1 metre high in places (a safety issue re. snakes, etc).

I am sure if anybody in Council or a local councillor were to come to Rainbow Beach they would agree.

Appears nothing has changed since the previous regime when in one instance, at Christmas, local people had to tidy parks, removing rubbish and mow parkland. Previously we got excuses, surely not again.

The Community News had also let Council know that lawns were well overdue for maintenance.

We received a phone call from that department  – and due to staff shortages over holidays, prolific rain, etc., that they weren’t scheduled to start until later that week.

Although I was grateful for the personal contact from Council, I reiterated it was still important for tourists to see town in our best light… and that tourist areas should be a priority over residential, during peak holiday periods – to no avail.

The new main street works look fresh – but their unkempt lawns make our little corner of the world look neglected and less attractive.

Illegal camping has been a constant complaint in town for years and an agenda item for Rainbow Beach Commerce and Tourism meetings.

Camping in the beach carpark and the mess left behind was the main concern, RBCT members noted the situation had worsened, possibly because of lower numbers at Inskip Point Campgrounds.

At the January RBCT meeting, Cr Jess Milne advised there was a six-week trial education – where council rangers issued warnings. She said it was an important issue, affecting Tin Can Bay as well and more funding required.

It was discussed that, unfortunately, the current guidelines do not distinguish between self contained RVs and regular ‘backpacker’ campervans.

Currently there is no freedom or budget camping offered within walking distance to town in Rainbow Beach.

If these existed, evidence from other RV-friendly sites has shown that it would be a great way to increase responsible tourists and funding into our towns, rather than being seen as a location that doesn’t welcome RV travellers who enjoy freedom camping.

Perhaps there is a community group who would like to offer their volunteers for a steady fundraising income?

Cr Jess Milne says she has been advised that a sanitiser will be installed “in the near future” at the water station, near Rainbow Beach Dump Point.

This was requested by RBCT after the gastro outbreaks at Inskip Point.

The start of the holidays saw some rough seas and wild weather, which stripped heaps of sand from the beach and Mudlo Rocks – which has claimed three cars over the holidays.

Holidays also had the invaluable Double Island Point roving lifeguards on duty moving most the days around the Point and the campgrounds, making sure people were swimming in safe areas.

On behalf of the lifeguards and lifesavers at Rainbow Beach and Double Island, we hope you had a great summer holiday!

A bumper season at the Dolphin Centre with visitors from all corners of Australia due to COVID.

The dolphins did not miss a day during the holiday season, but some days we only had Mystique and Patch, then the females, Ella and Aussie, would arrive with their calves.

Harmony had made his entrance many times and still has some issues with Patch.

The water is warmer during the summer so the dolphins are showing their rich base colour of pink on the underbelly and rostrum.

We are blessed with having the most concentrated numbers of the Australian Humpback dolphins in Australia within the Tin Can Bay Inlet and Southern Sandy Straits region.

We wish to educate people of the importance of recycling and not allow rubbish to enter waterways here or wherever their special paradise is around the world.

We are still finding local people promoting feeding at Carlo again. This issue has been reported  to the Department of Environment and hopefully some fines will be imposed. Dolphins are protected and illegal feeding is prohibited

I wish to acknowledge our wonderful volunteers who put in the extra hours during the school holidays so the operation could run smoothly.

No answers are forthcoming yet to business owners re the Fraser Island bushfire event.

However a Landowners Association has been formed and RBCT representatives attended a meeting last month in Hervey Bay and will lobby for recognition that there is more than one access point to Fraser Island, and government bodies need to communicate with all affected parties.

The office of the Inspector-General Emergency Management is undertaking a review of the bushfire event – with the date for responses from the community closing before it could be communicated via the monthly Community News.

The review will examine the effectiveness of preparedness activities and the response to the K’gari bushfire by entities responsible for the management of the island and bushfire and disaster management in Queensland.

Public submissions were due January 22 at Kgari.Review@igem.qld.gov.au