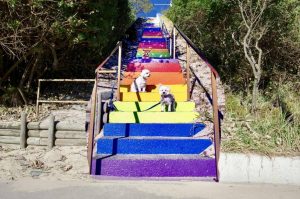 Gympie Regional Council (GRC) are seeking views from residents on how you want the stairs to look and the outcome will be decided by the majority.

If you are a resident of Rainbow Beach you should by now have received a survey form to vote on the outcome of the Rainbow Beach Stairs.

If you haven’t received one, and you would like to vote, please contact Council on 1300 307 800 and they will send you one. Every home in Rainbow Beach is allowed to fill in ONE survey to determine their choice.

A representative of the GRC said: “Council agreed to paint and maintain the stairs in rainbow colours for a period of three years. It also agreed to engage with local residents to evaluate the impact of the painting of the stairs and determine any future artwork.”

The surveys have a return date by September 6, however GRC will accept them until September 20.

The GRC representative said: “Council will make a decision based on the majority view and advise residents of the outcome through the Rainbow Beach Cooloola Coast Community News.”