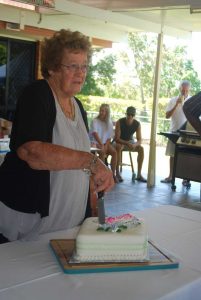 Sylvia moved to Tin Can Bay about 65 years ago. Sylvia and Bob had six children, they were involved in the trucking business: general carrying, transport of fish, fuel transport and sand mining.

After Bob’s passing, Sylvia moved to Bass Street and spends most of her time cooking, making jams and spreads – one of which you have to take, even if you haven’t one finished in the pantry.

Sylvia still gardens and loves creating crocheted hand towels, and is known for leaving the air conditioner off.

Although lawn bowls became too much for her, she still manages to catch the courtesy bus to the Cooloola Coast Bowls Club for dinner on Friday nights. Sylvia was very proud when the Bowls Club made her a life member.

On Saturday January 13, over 70 family and friends attended her birthday party held at Bevan and Sandra’s home. What a day! 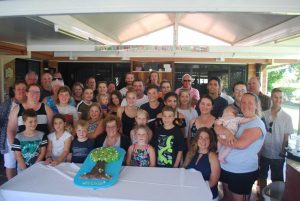 The logistics of getting all 42 descendants together on one day, travelling from Melbourne, Toowoomba, Blackwater, Rockhampton and Brisbane. Plus getting family back from Perth, rescheduling family going to Singapore and waiting on grandchildren to finish work.

We did it! A big thank you to all! (Not one of Sylvia’s descendants are deceased). Once all arrived a ‘Family Tree’ cake was presented to Sylvia with all 42 names on leaves around a tree. (Which included one on the way).

Thanks to Jenny Tritton for her work of art, also a birthday cake made by Janet Reibel, which was cut earlier in the day. All had a good time, with great grandchildren finishing off with a swim in the family pool.

See you in ten years.