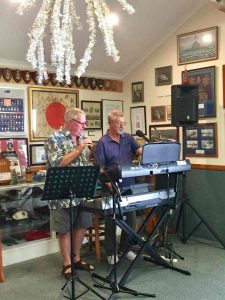 2022 is up and running for the Tin Can Bay RSL with plenty planned for members and visitors alike.

The year kicked off with a bang with a great Australia Day event featuring traditional Aussie fare, cold drinks, and fun activities.

Special events planned for the first quarter of 2022 include the ever-popular Trivia with Tezza and team on Saturday 26 February. The day will begin with a BBQ lunch from 12pm followed by trivia, eyes down at 2pm. Book your teams in early to join in the fun!

Then flag Thursday 17 March on your calendar for the RSL’s famous St Patrick’s Day replete with green beer and all the trimmings.

The ever-popular Sunday BBQ featuring live entertainment, great raffles, and the best BBQ in Tin Can Bay, will continue. The BBQ runs from 12pm to 2pm. Both the steak sandwiches and hamburgers are terrific so make sure you give them a go.

Entertainment coordinator Michael Austin informs me that he has a great program of performers booked. Michael declared, “The entertainment on Sunday afternoon at the club will be bigger and better than ever. We have a number of new performers booked who will be sure to delight members and visitors alike.”

Well Michael, we look forward to Sunday afternoon music at the RSL. Thank you for your service!