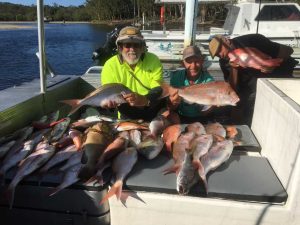 Members participated in the recent Inter Club Fishing Competition and despite the windy conditions, a number of quality fish were weighed in at Hervey Bay. The club was well represented at the weigh-in and came fifth in the competition.

We thank everyone for putting in the time and trying their best for the club.  Congratulations to Derek Andrews on his Prize Winning Whiting at 0.424Kg

Fishing has been hit or miss lately, but those who are putting in the effort are being

rewarded with a few quality fish. There have been decent size and numbers of summer whiting caught in the shallows on squid, live worms and yabbies, and there are good numbers of legal-sized bream mixed amongst them.

Flathead are being caught, with one at 78 cm which was caught and released recently, with larger ones having been seen in the shallows. There are always a few diver whiting to be found, but not easy to find quality ones.

A few squid are being caught in the usual areas but not consistently in the big numbers seen through June to late August. There have been a few School mackerel and one Spaniard at 13.5 kg caught in the Inskip Point area recently, together with the occasional good sized trevally, plus tailor have been caught in healthy numbers on Fraser Island.