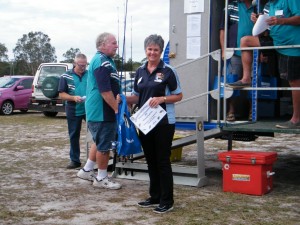 The Inter Club fishing competition, hosted by the Burrum Heads Amateur Fishing Club was held during the June long weekend.

Despite the prevailing weather, members presented a variety of species which resulted in the club being awarded fifth place.

Twenty-six members attended Burrum Heads at the weigh in and awards presentation ceremony. All members enjoyed the friendship, hospitality and an excellent barbecue luncheon, provided by the Burrum Heads Fishing Club.

The event also gave our members the opportunity to meet with and discuss the fishing competition with other competing inter club members. We look forward to the 2016 event which will be hosted by River Heads Amateur Fishing Club.

Our raffle winners, Mr Brian Linfield of Cooloola Cove and Mr Ross Miller of Tin Can Bay,  were presented with their Woolworths Gift Cards at the Fishing Club’s mini comp weigh in at Crab Creek with 30 members present.

The president, Jim George, expressed his appreciation and thanks to members of our community for their consistent support of volunteer and non-profit groups in our region.