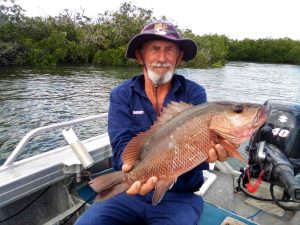 OK, who spotted the “deliberate” mistake in my last report?  The fish that was shown being held by Chris Rippon was in fact a moses perch or fingermark – we had a couple of concerned fishermen/women phone our secretary – sorry Debbie. One call was direct to me by my son Chris, so that was a bit embarrassing.

Club members have had a bit of a lean time of late, what with the rain. Even the hardiest of our club members have found getting onto the water a bit difficult lately. To say the weather has been challenging is a bit of an understatement!!

The club held a couple of social events during the last month including its Christmas and Annual Awards presentation, all of which were well attended – morning tea at the Bay Art Gallery, breakfast at Temptations by the Water, and our Christmas party at the Cooloola Bowls Club – all excellent venues. We were also very active in fundraising running our Chocolate Wheel at the Tin Can Bay Markets as well as selling snags at Bunnings.

On the fishing front all but 1 out of 5 trips had to be cancelled due to the weather. A few of our more dedicated members have been out and about. Derek Andrews has had a bit of luck collecting a few mangrove jack on live bait and squid, and in one case he caught one jack on yabbies while chasing whiting – he also landed his share of whiting.

Other members who ventured out report solid catches of mangrove jack, flathead, whiting, and trevally, with the jacks ranging between 44-48cm. There have also been the odd cod and barramundi being caught in the larger creeks.

The increase in fresh water has seen a few crabs on the move, but they are still patchy and the females are far more prolific. Keep an eye out for crabs that are not full, generally you will find that not only do they feel lighter than expected but they will more than likely have a nice shiny new shell that hasn’t had a chance to pick up algae and other growths.

If you are interested in joining our club look us up on Facebook or our web page: tincanbayfishingclub.com.au