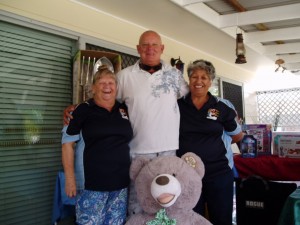 Fishing has been described as slow in the Great Sandy Straits at the moment with better results expected in February.

There have been reports that mud crabs are slow at the moment and small prawns are appearing in numbers which could result in good catches during March.

Grunter are being caught in the upper reaches of the Creeks and some good sized whiting are about if you are lucky enough to find them. There have been some good cod being landed and mackerel are appearing in greater numbers.

Members have also caught some trevally and queenfish in Snapper Creek. Some flathead are being caught on the flats at Mullens Creek.

We presently have about 65 members with new members always very welcome. We would really like to get members from Rainbow Beach to join and we will be pursuing this objective during the year. We are trying to reach our goal of 100 members.

Our toilet block will be completed at our club at 33 Dolphin Avenue, by February 12 – a very welcome and important facility. The next priority item will be getting power to our Dolphin Avenue site.

Meetings are held on the second Sunday (the next is 10am, February 14) – come along and you will be welcomed by our friendly members or email tcbfishingclub@bigpond.com for a membership form – only $30 to join!

We would like to thank all of our Rainbow Beach sponsors for their willing support and for making our raffle a great success: