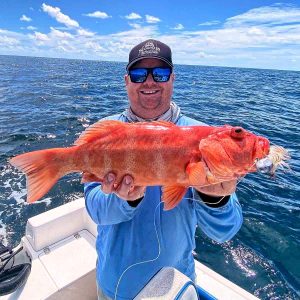 Chris Rippon with a coral trout

The Club had a break over the January holiday period and as of the time of writing this article (mid-February) we have only held one fishing event and no social events.

That doesn’t mean that we have nothing to talk about as our members didn’t stop fishing – check out the photos!

Our first trip for the year was held on Thursday 10 February where there was a good turnout of?boats and?members.

Some good quality fish weighed in?- nannygai, cod, sweetlip, and mangrove jack. Before you ask – fresh live bait (mullet) was working well as were the better prawn style lures.

Members also report that Kauri Creek has been fishing well for?whiting and flathead. ? Squid is still being caught, but it was hard with the freshwater following the rain – they should be back now that the water is clearing up.

Unfortunately, there have been reports of some “share-farming” activity where pots have been stolen or cleaned out. If you are witness to any of this activity, please report to the authorities – Queensland Boating and Fisheries.

On a brighter note, I hope you get to wet a line this month, and remember if you are interested in joining, please contact the Secretary by email – tcbfishingclub@bigpond.com or mobile 0437 242 171

Postscript from our January article:

Just a note about a photo?shown in our January article of a large fish caught at the boat ramp by a member of the public. At the time the picture was provided to us we were advised that the fish was released, subsequently a member of the public contacted us to advise that it was not the case. We have contacted the fisherman involved and he stated that he did release the fish but did so at another site. We make no judgement on individuals’ choices to keep or release.