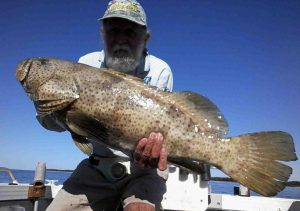 With the weather turning colder it looks like “office-hours-fishing” for all but the keenest anglers. That said, there are opportunities for good catches made possible by planning fishing expeditions around the tidal conditions for the species you target.

The squid are still a bit patchy, but some good individual catches are being made by those willing to put in the time to find the combination match of tidal movement, jig presentation and colour.

The first couple of hours of the run-out tide usually works well but good catches can be made at other times of the tide; the main criteria is to have your jig in the water and not at home in the tackle box.

There are a few quality flathead being caught on various lures by those putting in the time and effort. Pictured here, club member Derek shows off a beautiful 69cm flathead (one of four) caught in the shallows of the inlet.

Tuna of various species have been feeding aggressively throughout the bay, often for most of the day. Casting metal lures or weighted clouser-type jigs at the feeding schools or trolling various lures in the general area where the fish are feeding, has recently led to some really good catches.

A beautiful Longtail tuna was caught this month, by jigging a soft plastic lure on one of the deeper reefs in the bay.

If a tuna is unable to be released (in good condition) after the battle, remember they are a good eating fish.

Fillet and skin the fish then cut out the dark meat, cut the chunky part of the fillet into steaks about two centimeters thick, lightly sprinkle with salt and ground pepper and place on a hot oiled BBQ plate for a couple of minutes each side.

Alternatively, tuna can be cut in thin slices and put in a basic smoker/cooker and then enjoyed hot or cold with your favorite adult beverage.

While you have the smoker out, try cutting a couple of squid into strips and smoking them for a tasty snack. By the way, don’t waste the tuna skeleton as it makes excellent crab bait and may entice a mud crab to feed when they can be a bit quiet in the cooler months.

The reefy areas and ledges in the bay have been producing a mixed bag of reef species as well as a few quality cod for those who fish the tide changes.

There are quite a few sharks and large green toad fish (which I am fairly certain are employed by the local tackle supplier) nipping off hooks and rigs causing a bit of grief, but despite that…get out, wet a line and share the experience.

Two things to remember in life: