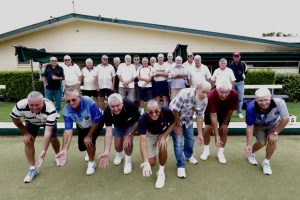 The teams line up at the Dodt Cup

The Dodt Cup was played at the Albert Bowls Club last month. Teams from around the Gympie and Wide Bay district competed in this popular event. Seven teams were nominated with Tin Can Bay going down by one to Albert Bowls after three hard games.

The Dodt Cup was started in 1977 by Brian, Mervin and Kevin Dodt in memory of their father Viv and brother Tommy. The Dodt men were all excellent bowlers. After all these years the Dodt Cup is still a top competition on the bowls calendar.

On the previous Wednesday the Tin Can Bay Men’s bowls held a social day with the teams selected to play in the Cup playing against social bowlers. This was an opportunity for the teams to prepare for the Cup.  Tin Can Bay has won the Cup three times with many close losses since 1977.