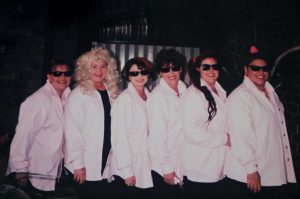 Ruth Modin has been involved since the very beginning, some might say she is the reason the Classic exists.

“The inspiration to start a fishing competition in Rainbow Beach came from the Fraser Island fishing comp. I thought why can’t we do that here for men AND women?” explains Ruth.

Thus was born the Rainbow Beach Fishing Classic, with the very first one being held on August 28 1987. There were about 30 entrants and the presentation was held under a tarp with a XXXX lean-to bar.

One thing that is prominent in Ruth’s memory about that first Classic is that the largest bream caught was by local lady Val Thomsen at 1.68 kg, a record that is still held today!

“When kids began entering it really made it a family Classic. It has been wonderful to see the kids grow up and still love fishing, competing and having fun. It keeps them off the streets.

“We had all sorts of fun and a few near misses. I remember one night the wind was cyclonic; the tent was blowing all over the joint.

“Shelly (Jones) was holding onto the poles and swinging around like Sister Bertrille. We just moved everything to the back of the old pub. We pulled it off.”

Ruth went on. “We were lucky enough to attract the Australasian Fishing Championships in 1993. That was huge. A whole month of fishing! The people and money that bought to our little town was incredible.”

One of the hardest things about holding such an event has been getting enough volunteers and obtaining sponsorship, and it still is. “Mitsubishi saved the Comp a few times” says Ruth.

“It is all about the whole family and Ladies Day always was a highlight. The ladies were the entertainment… lots of games and fun times were had by all!

“You’d see these young girls fishing with the best of them through the day, then tottering around in high heels of a night,” laughs Ruth. “What a contrast.” 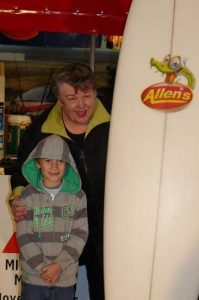 Another couple of locals who were also involved at the beginning, when the competition was run by Rainbow Beach Commerce, were Sam and Maureen Mitchell from the Tourist and Information Centre.

They donated a prize of $1000 for the Heaviest Beach Fish in the 1988 Classic, and have been sponsors ever since. They are now proud to sponsor the cadet category.

Sam used to work the bar with Ricky Modin in the early days when service was from an esky.

He was always in the thick of the Ladies Day antics…..often chauffeuring the girls around, catching yabbies for them, baiting their hooks and as Sam says, “I made sure the ladies had ample liquid refreshments.”

Maureen, who was treasurer back in the day, explains “The Classic was a great fundraiser. All the profits went into promoting the town by way of getting brochures made up, which we took to various travel and caravanning shows all over the country.

“In those days no-one had even heard of Rainbow Beach, but we put the town on the map and most of it was because of the money bought in by the Fishing Comp.”

“I only participated in one Ladies Day and that was so much fun. We went as the Pink Ladies and Sam and I were Sandy and Danny from Grease.

“It really was a great thing for the town, with everyone getting involved and working and playing hard for a common goal…to get our town on the tourist map!” says Maureen.

Sam agrees, “The final nights in the big tent were always fantastic, with a great atmosphere and so much fun. Everybody got involved and had a ball.”

Due to skyrocketing insurance costs the competition was moved to the Sports Club about 14 years ago.

As Ruth asserts, “This really has been the best tourist drawcard to our town because it is so unique. A whole week of fishing every year – that’s a lot of people contributing to our local economy.”

Hopefully the Rainbow Beach Fishing Classic will still be around in 2036 for the 50th anniversary!