Located so far away from loads of relatives, we are fortunate that our natural environment keeps bringing them back to Rainbow Beach for a visit. For a first, family and their friends walked to our door after trekking from Noosa – they tell us all about their adventure including a very unexpected, alcohol laden meal!

The great! walks project, a series of bushwalking tracks through wide expanses of Queensland’s best national parks, is gaining popularity with bushwalking enthusiasts from Canberra. After the success of the Fraser Island great! walk, completed by friends and family of ours in July 2014, there was much excitement about experiencing it ourselves.

High fire danger on Fraser Island at this time of year meant a revision of plans. Luckily for us, the Cooloola great! walk from Tewantin to Rainbow Beach provided a suitable alternative. 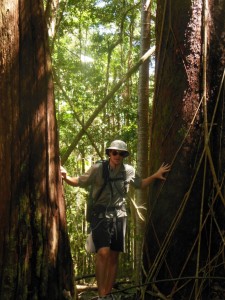 The walk would take five days as we traversed 90 kilometres of the Cooloola sand mass, a 56,000 hectare dune of wind-blown sand accumulated over 500,000 years. With 140 mm of rain forecast for the first day, we were considering delaying the start of the walk until being reassured by the ranger at the National Park visitors centre in Tewantin. “You’ll be right”, she said, and we took her word for it!

Beginning at 6am on Noosa’s North Shore, the first day was spent ascending the sand mass. Shortly after climbing Mount Seewah in the pouring rain, we reached the first campsite; Brahimy, at the 14 km mark. We were provided with toilets and benches at every campsite, quite a luxury out in the wilderness. Although the sky remained threatening throughout the afternoon, we received far less than the 140 mm of rain predicted.

On the second day we continued climbing for another 10 km along the dunes above Teewah Beach before reaching the Cooloola Sandblow, an imposing two- kilometre moonscape. A break before crossing the sandblow brought rain as Miles fired up the cooker for a brew. With the sandblow being a navigational challenge in poor visibility, Simon was sent in as a sacrifice.

Following his nose rather than the recommended compass bearing, Simon got us to the other side to begin the 10 km descent toward the Noosa River campsite. We encountered a group of German girl backpackers walking up to view the sandblow in their shorts and thongs. The only other people we had seen on the whole walk. Or was that an illusion 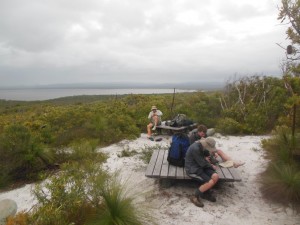 Backdrops of campsites were spectacular

after too long on the track?

Reaching the Dutgee campsite at 11.30am after six hours walking, those of us brave enough to chance it with the bull sharks were off for a swim in the picturesque Noosa River. As the rain got heavier we made a dash for the tents, brought out the radios and listened to Lyon’s heroics on the fifth day of the Adelaide test.

Day three was a shorter but steeper day; some of us began walking in thongs as the track wound its way through the swampy surrounds of the Noosa River. After a flat two kilometres, we encountered tall woodland forest and dry rainforest environments as we climbed back onto the sand mass.

Again it began to rain when Miles boiled the billy at morning tea, and we ended up reaching the Litoria campsite at a little after 10.30am. With no cricket on the radio, we wandered down to investigate Lake Cooloomera, about 600 metres further down the walking track from our campsite. 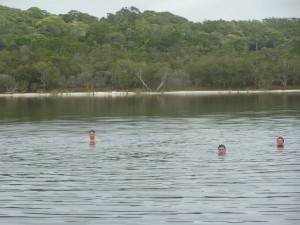 The campsite is named after the tree frogs which enjoy the acidic waters of this nearby lake. Upon entering the water there was some concern about the acidity of Lake Cooloomera from the hypochondriac in the group who believed his skin was burning! In my defence, there was a strong smell of hydrogen sulphide.

Day four was spent walking through 21 kilometres of wet rainforest in hot weather as we closed in on Rainbow Beach. We reached our last campsite, Kauri, and after an afternoon playing cards and avoiding the 3 kilo pine cones which are said to fall this time of year, the evening was spent listening to the deafening sound of cicadas in harmony.

The meals on this walk had been very sophisticated so far, but as a weight saving measure we had planned to have couscous and powdered mash potato for a bland final dinner. I took on the role of head chef and made up the couscous in a pot which unknowingly had methylated spirits stove fuel spilt into it. Needless to say the couscous had some flavour to it, and although Simon seemed to enjoy it, the rest of us were left rinsing our mouths after our first taste. Interestingly, Simon was off to bed very soon after dinner.

We attempted to sleep through an encore performance from the cicadas early the next morning and, leaving at a tardy 6.30am, we climbed out of the rainforest for a swim at Poona Lake. From here it was another 9 kilometres to go.

Luckily for us, the Boak’s relatives live close to the end of the walk and we arrived on foot – a first we are told. Craving something “deep fried and smothered in chocolate”, as the fairy godmother (aka Simon) put it, we made our way down to the Coloured Sands café for a bite to eat and reflected on an enjoyable five days in the Cooloola wilderness.