Home  »  Featured • Tourism   »   The STAIRS outcome has been decided! 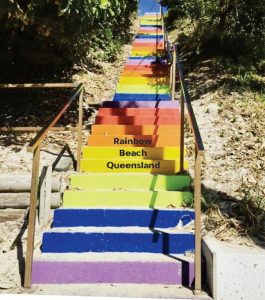 The Stairs with the words Rainbow Beach, Queensland have now been approved (image only for story purposes)

We now have a final decision decision on the Rainbow Beach Stairs.

A total of 408 surveys were returned including 19 blank and 22 with multiple options.

The 4 options and votes were:

So the winner is Option D, the Rainbow staircase with the words “RAINBOW BEACH QUEENSLAND”

Surveys were counted by Gympie Regional Council (GRC) on October 8, 2019 and presented to and endorsed by Council at the ordinary meeting held on October 23, 2019. They:

GRC has made a commitment to maintain the stairs for a period of three years in an effort to promote Rainbow Beach.

All residents have had the opportunity to submit a vote, either by a survey dropped to their doorstep, or to have a voting form sent via the contact information supplied via social media and traditional media.