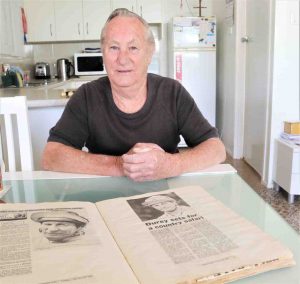 Local man, Bobby Durey with press cuttings from his days as one of Australia’s leading jockeys.

While most Australians organise outfits and top hats for the Melbourne Cup, there are others who take the time to reminisce about their time competing in the great race.

World travelled Lightweight Jockey Bobby Durey lives in Rainbow Beach and rode in his first Melbourne Cup at the age of 16.

Bobby said: “I wanted to win, but I knew he couldn’t win. I’d never seen the horse before and had to work him out between the enclosure and the barrier.”

He had 16 rides in the Melbourne Cup, 12 in the Caulfield Cup and rode over 2000 winners in his career in Australia and overseas.

He rode Alsop to six wins including the 1969 Moonee Valley Cup. Alsop was beaten by a head in the 1969 Melbourne Cup by Rain Lover and Bobby was booked to ride him, but the owner swapped him out two weeks before the race.

Bobby grew up in Hamilton, Brisbane, and moved to Melbourne at 14 as an apprentice jockey, gaining his jockey licence at 15 and finishing his apprenticeship at 21.

He turned trainer in his forties and trained 127 winners before returning to the track to race and then retiring at 50.

Bobby said: “It was a fulfilling and honourable life where I met a lot of famous people when I rode for them, but never met them again.

“I rode for them all. I was there to do a job and it was just business.”

Bobby laughs when he talks about riding the horse owned by Hollywood actors Gregory Peck and Fred Astaire.

“They didn’t know what to call the horse so Gregory Peck said, ‘call him anything’, so they did – he was called Anything.

Growing up next to trainer Les Carstens and his wife Miff in Hamilton in the ‘50s, Bobby went with Les on weekends to the track and wanted to ride and feed horses and spent more time there than at home.

“I just loved the animals and was getting about two shillings which was a lot of money.

“Les originally came from Victoria and could never get a decent horse so he decided to go back to Melbourne.

“He said to Mum, if he wants to come to Melbourne and be a jockey he can come with us. I didn’t really want to go to school.

“The headmaster eventually wrote a letter to say ‘he wants to be a jockey and let him go’ so I left school at 13-and-a-half and, as they had no children, they treated me like their child.

Bobby’s favourite if he had to choose one was Prairie Fox who won 27 races and his favourite track was Moonee Valley where he felt comfortable and rode a lot of winners there.

“Prairie Fox was a mongrel and wasn’t the best horse I rode but was the best for me.  He did everything he could to go against you but I got on all right with him and he liked a wet track.

“Races all start on the starting line and the only way to even the race up is to give bad horses to a light jockey.

“I could ride a lot of races and was always in demand, but never won the amount of races because the heavier boys rode better horses.

“For every ride the heavyweights got, I got 10. I was just a natural lightweight and the leading lightweight jockey.

“I ate two meals a day and still do. You had to be disciplined with weight and I maintained fitness by doing track work each day from 4.30am, I still wake up early every day.”

His biggest injury took him out of racing for three months with broken bones, back and ribs and he has lost count of how many he had broken, but he said, “probably every one in my body”.

Bobby said while his career was exciting and fulfilling, “it was a job, I was my own boss and I have been there and done that and now the job’s finished.”

He moved to Rainbow Beach as he was on a 12-month round Australia trip and decided to live here.

He doesn’t have pictures of his past around his home and doesn’t give out any tips on the races.

I found Bobby to be a humble man of high integrity with a huge past, and it was an honour to spend time with him.