Home  »  Community • History   »   The life of the Fraser Island puntmen 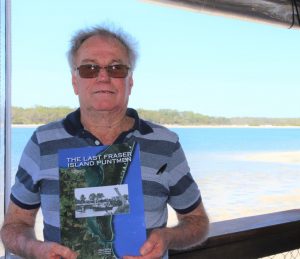 Author of The Last Fraser Island Puntmen, Allan Shillig with his book – the cover was designed by 12-year-old Aiden Obst who also helped with the layout and taught Allan how to edit

Allan Shillig has written a comprehensive book on his account of the time he spent as a puntman working on logging vessels delivering timber to the sawmills in Maryborough.

The book covers the period of the Fitzgerald Enquiry into the conservation, management and use of Fraser Island and the Great Sandy Region, and the protests and actions of the Conservation Movement that took place at the time.

Allan worked on the punts with his father Des and brother Larry in an industry that was hard and dangerous and has recorded the changes that occurred in the industry.

Allan and his brother Larry delivered their last logs from Fraser Island to the Hynes Mill in Maryborough in January 1992.

Allan said: “Although logging went on for 120 years, I have only tried to cover my time there. I just thought it was important to record it all.”

He said: “I loved it, it was a great lifestyle but very hard physically and dangerous in the earlier boats.”

When his father started working on one of the boats in 1965, the Kgari, Allan joined him, initially as a deckhand, before learning how to become a puntman, and he ended up staying for 27 years.

This is a great read and an important record of an industry not forgotten by those who were involved in it over the last century in this region.

You can purchase Allan’s book, The Last Fraser Island Puntmen, at Wolf Rock Dive in Rainbow Beach, Bearing Service Centre in Maryborough and Tin Can Bay Mower, Marine and Cycle in Tin Can Bay or call Allan Shillig on 0407 044 286