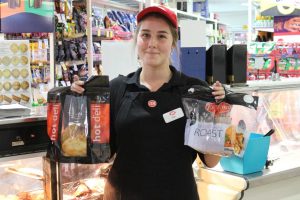 Amy was thrilled to be the pic of the month – she is holding a cooked pork roast and a cooked chook which are delicious!

Hello again to all in Rainbow Beach land. Here we are on the cusp of another holiday period. Time does seem to go by so quickly.

I had a call from Liam asking if I could babysit Addison while he and Jesse were working. It has been a while since I looked after a baby that age. (JJ, the other grandson is now 7.) I nearly forgot how much work they were till they go to sleep.

Bernie and I went on a holiday for two weeks to a couple of Asian countries. We do take a lot for granted living here, it is only a quick trip overseas to remind me how lucky we do have it.

We complain about roads when some places don’t even have running water. One thing I did like was the lack of traffic lights and how there seemed to be a “absence of road rage” considering the congestion.

I do think in some respects we live in a nanny state! Our TVs do seem to try very hard to conceal what is really going on in the world.

The only bad thing about a holiday is it ends too soon. Well, time to plan for the next one!

We all depend on technology in our wonderful world, but what happens when it goes belly-up? Just ask Justin at Tin Can Bay.

About a month ago we had a call from our software supplier for the store. A new system was to be rolled out and unbeknownst to us we were first on the block. Here he is a month later still trying to fix issues, I’m glad I’m here and not there.

Now to the sports report:

Who from Queensland really wanted a decider? Had the series been done and dusted poor old ANZ would be empty.

It has been interesting listening to the discussion on holding the game on a Sunday.  My personal opinion is that it should be on a Wednesday and only in either QLD or south of the border.

I spoke to a mate of mine (who lives in WA) and he was more interested in the AFL on the weekend.

Listening to the ratings, the numbers were down for the Sunday game. I do understand the NSWRL, I mean the ARL are trying to grow the game but it doesn’t wash with me.

It seems the same problem with the Grand Final, with stadium redevelopment going on they still want to keep it.

It is great to see Ash Barty going to Number 1 in women’s tennis. Maybe some of our male players should shut their mouths and let their rackets do the talking? I can’t see it though.

Daniel Riccardo’s Renault just isn’t up to the pace, but I suppose 50 million fixes that.

The Lions had a good win last weekend to make it into the eight. Good to see that after so long, the Lions fans may have something to cheer about.

The Broncos are just outside the eight but with Origin it’s going to be a tough draw.

It was a sorry sight to see the Matildas bow out of the World Cup. The only saving grace was seeing Sam Kerr being offered a million to go to Chelsea.

I know that she would be leaving Australia, but as a sports person, I’m sure you would want to play with the best and get paid for it.

Lastly to the cricket. As I am writing this before the big game, one can only hope we trounce the poms tonight in the one day World Cup, but only time will tell.

Matt, Bernie, Justin and our friendly staff at the IGA.