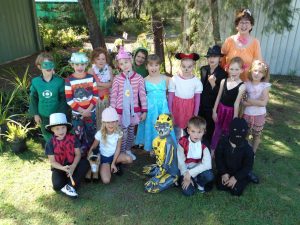 Therese and her class dress up for book week, 2012

Therese Young is a much loved member of our community who has been a classroom teacher and an integral part of Rainbow Beach State School for 23 years, but did you know, she has also worked as a Nanny, an Assistant Matron and even a Nurse’s Aide, emptying bedpans and all!? We caught up with Therese to talk about her time in Rainbow Beach and her love of teaching …

Therese retired from teaching in May this year.  She has been on long service leave since the beginning of the 2018.  Therese has been spending time with family, planning travel opportunities and generally developing interests after teaching.

Therese’s decision to pursue teaching began at the age of twenty-one, during a twelve month working holiday in the U.K.   Both working as a Nanny and as an Assistant Matron in a preparatory school for boys aged eight to thirteen, set the stage for her long term career path.

Prior to this she worked in a hospital in London as a Nurse’s aide.  However teaching was far more appealing than emptying bedpans! So she headed home to Brisbane, began an associate diploma in child care first then changed to a diploma of teaching in Pre-school/Primary.

“I completed my teaching diploma in 1987 and began teaching in Rockhampton at the beginning of 1988.

“I taught Preschool in Rockhampton and Biloela and then requested a transfer to Emerald working as an advisory visiting teacher in Early Special Education.

“This role required working across the Central Highlands and Coalfields supporting programmes for children aged 0-6 who had a disability and special needs.

“This work included working with children, parents, centre based personnel and school staff.”

Therese worked in this role for three years followed by a year at Emerald North Preschool.

“My husband Al and I met while both teaching in Emerald and we had a great time in the location.”

After six years working in Central Queensland, in 1994 Therese was transferred to Rainbow Beach State School.  This was familiar stomping ground for Al who had visited many times, surfing and camping.

“My first visit to Rainbow was very memorable!  On one occasion, Al and I called into Rainbow on our return trip to Emerald.  On Al’s suggestion we took a walk along the beach, to Inskip Point!

“I remember, I kept asking how much further and Al kept pointing towards Inskip and Fraser saying, ‘not much further’.

“Two apples, and a large water bottle later, we reached the Point only to retrace our steps on a full tide – yes, soft sand walking all the way back!

“So that was my introduction Rainbow!” she said laughing.

The pair settled in very well, loving the coastal change.  Al joined the Life Savers and volunteered on patrols then later took on a group leader role with the Nippers program.  Therese supported the school P&C initiatives as well as the local Playgroup association when their children came along.

Therese began teaching at Rainbow Beach State School in 1994 under the experienced leadership of Heather Robertson.

“Heather was welcoming, supportive and actively led the school with amazing energy and community involvement.

“When I began teaching at Rainbow enrolment was around sixty children and it was a three teacher school {included the Teaching Principal}.

“There was one full-time teacher Aide and a part-time Preschool Aide.  I was teaching a Preschool, Year one and Year two multi-age class.”

Over the years, Therese has mostly taught the lower grades but has had teaching duties with the middle years in literacy and recently took on a mentoring role to support a district focus in the teaching of reading.

“My training and expertise is definitely working with five to eight year olds.  It’s such an engaging time. Little people are so switched on, will question and build on their experiences with adult interest and support.”

Therese has worked at the school pretty well continuously from 1994 until 2017 taking leave to have two beautiful children, spend time with family and long service leave along the way.

Therese said, “Rainbow Beach is a great community to raise children because of its safe, natural, healthy lifestyle.

“My children have developed great friendships over the years and have a genuine love of the outdoors.”

Although Therese finished full-time teaching at the end of 2017, she continues to work as a volunteer at the school.  She assists with a support program and with small group learning tasks.

“It’s wonderful to see smiling faces and keep my connections with students and staff,” she said.

Therese enjoys her volunteer work at the school as it is a great transition into retirement from teaching.

“Most of the staff have been working at the school long-term and I have really valued working with such a professional team.

“But above all, I have valued and will continue to value, these fantastic friendships that have been established over many years.”

Now in retirement (from teaching) and having dusted off her ancient sewing machine, Therese has joined the Boomerang Bags group and learning a thing or two about watercolour painting at the library.

Mmmmm………………and there’s a trip to Tasmania as well as Port Douglas later in the year!

“Am I adjusting to life after teaching?  Well, I’m having a really good shot at it!”