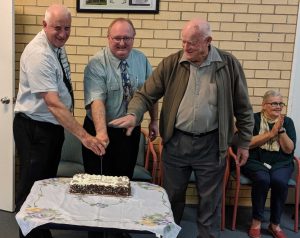 Adrian and Dell McClintock, under the authority of Rev Gary McClintock at Gympie Wesleyan Methodist Church served and pastored the church for the first eighteen months of the church’s life.

Pastor Scott Lucas was then appointed as pastor on January 1, 2011. Since then, the Church has enjoyed being part of the school community.  In 2013 they shifted to the Veterans and Community Hall in Cooloola Cove. All were able to join in the 10th anniversary celebrations last month.

Our services are held on Sunday at 9.30am at the Cooloola Cove Veterans Community Hall on the corner of Nautilus Drive and Santa Maria Court, Cooloola Cove.