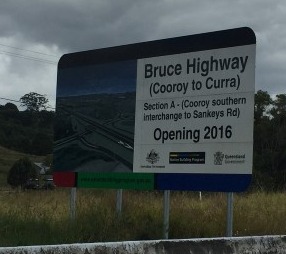 WORKS to upgrade around 10.5 kilometres of the Bruce Highway between Traveston and Woondum came a step closer today with the first stage of tendering for the project now complete.

Deputy Prime Minister, Minister for Infrastructure and Regional Development and Federal Member for Wide Bay Warren Truss said the Cooroy to Curra project is one of Queensland’s largest road upgrades.

“The new highway will deliver improved safety, reduced travel times and boost the local economy by supporting more than 680 jobs in the region,” Mr Truss said.

“Interest in winning the contract for Section C, between Traveston and Woondum, has been high with 10 applications received from pre-qualified contractors in the first stage of the tender process.

“When calling for tenders for the first stage of works, the Department of Transport and Main Roads (TMR) required potential contractors to demonstrate their experience working on large infrastructure projects, including proven high performance in effective environmental management.

“TMR has now assessed the initial applications and has selected four contractors to progress to the next stage: Fulton Hogan, Lend Lease, John Holland and Leighton Contractors.

“These contractors have until 14 December 2015 to provide TMR with their submission for the second stage of the tender process, which includes the price component to deliver the upgrade. TMR will then evaluate the submitted tenders and award a contract early next year.”

“Section C involves construction of a new four-lane highway between Traveston and Woondum, with capacity to be upgraded to six lanes in the future,” Mr Bailey said.

“The project also includes safety works along the existing highway between Woondum and Venardos Avenue, just south of Gympie, which are expected to be completed by mid-2016.

“Construction is expected to start on the major works in early 2016 and finish in late 2018, weather permitting.”

The project is jointly funded by the Australian and Queensland Governments.  The Australian Government is providing up to $307.4 million toward the $384.20 million project.