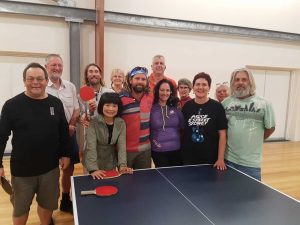 The inaugural Rainbow Beach table tennis competition was hotly contested over six weeks with team ‘Escape’ taking the champions trophy – the next round starts August 8!

The inaugural table tennis competition in Rainbow Beach has been hotly contested over the past six weeks, with the Escape team of Dave Arthur, Tony Arthur and Suzie Faulkner taking the champions title.

There were some very close and not so close individual games through the competition but the team scoring system meant the final placings were all fairly close. The order of the final table was Escape, Rainbow North, Rainbow South, Kiwi Connection, Australia the Gift and Rainbow Realty.

Organiser Bob Gudge thanked all the players for taking part, and said he was very pleased with the quality and spirit of competition and is looking forward to an increased participation in the future.