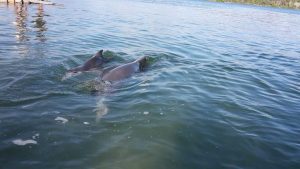 Ella with her new baby

We have been hoping and saying that Ella was in calf for some time and sure enough, early last month, she arrived with a beautiful little calf.

Ella didn’t stay long as the calf was tearing around, tail slapping and just being like a toddler. We think she just brought the calf in to show us.

It may be several weeks until she comes back, so we are hoping that they take care and keep the sharks away. This is a very vulnerable time for a newborn calf.

The visitors on that morning were so thrilled to be part of the show the calf put on. The cameras were rolling and videos recorded. Lucky them. We even let our off-duty volunteers know of the event and most of them came down to view.

As you will see by the photo, the face of the calf is rather white which is unusual. When Squirt was brought in at a couple of weeks of age (5 years ago) he was completely grey and is now only starting to become lighter in colour on his underside.