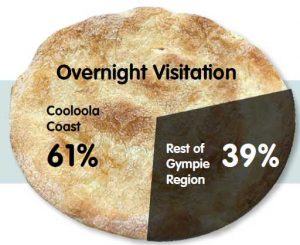 The Cooloola Coast sub-region dominates overnight visitation to the Gympie Region, something a new report is keen to change

The Gympie Region Tourism Discussion Paper was endorsed by Council in late October.

The paper delves into data and observations on what’s working and what could be improved for tourism in our region.

Unfortunately, it was published in November, as the paper was delivered, and comments were due in before December, despite advising Council of our coastal deadlines.

The report claims that our coast is “stealing share” from Gympie City, and that sub-regions are “cannibalising” marketing initiatives.

Why would a report that it is trying to create harmony across each corner of the region, use such inflammatory words?

Tourism business owners on the coast do work collaboratively, and those who I have spoken to would agree with the report that a “visitor dispersal strategy is about growing the entire pie for the benefit of all sub-regions”.

The fact is, travellers know the names Rainbow Beach or Tin Can Bay, Gympie is not on their radar yet. As the report suggests, “Gympie City increasingly has become a utility destination where visitors drive ‘through’ rather than drive to”.

It stresses that it is vital Rainbow Beach’s visitor numbers are not jeopardised, and that their maintenance or growth are of “equal priority” to visitor dispersal region wide.

The report asks that each area get behind the “ONE message”. I guess as long as that means we aren’t confusing people with the word Gympie, when we market Rainbow Beach or Tin Can Bay, that should work out fine!

They want us to focus on experience development as opposed to marketing, so more travellers stay longer.

For instance it says that a Kilkivan Church should be moved to Phil Rogers Park and refurbished with a “Montville Chapel” style. This would position Rainbow Beach as one of only “two” true beach-located churches in our state.

It mentions the proposed Tin Can Bay Jetty, and the Mary Valley Country provide other backdrops for the lucrative wedding industry.

The report calls for more paid tourism experiences in Mary Valley Country, Kilkivan and Goomeri to capitalise on the emerging food tourism or bike trail destination credentials we have.

Definitely, RV travellers at the Gympie Rest Areas are guests of the region (it is not illegal as the document states). Correctly, the report does suggest they should be receiving the best of welcomes, and that Council find ways to extract more spend as they travel here.

They ask us to consider the best location(s) for the region’s future Visitor Information Centres, as the highway is upgraded further, remove billboard signage and consider names of places.

You’ll find the report on Council’s website; let me know what you think!