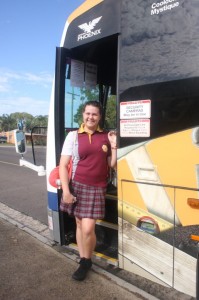 Bus travel is a way of life for families who choose to live on the Cooloola Coast. In Rainbow Beach, Gympie pupils leave just after 7am and return home about 4.30pm.

Those with high school children will know it is not a choice, besides boarding school the only other alternatives are driving children to school yourself or carpooling – unfeasible options when you are working or raising younger children.

Local children are fortunate to have their wonderful bus drivers – a job that is not for the fainthearted.

However, we received complaints last month that children are standing on the bus and were advised that this is acceptable.

Mr Warren Polley told the Community News, “We did identify an over-loading problem on the first afternoon of the change – Monday 11th. Appropriate changes were made the next day and this has fixed the issue.  After this Monday event there were some standees from Gympie SHS, but all ‘excess’ students have alighted the bus by the time it gets to Goomboorian Store.”

“You may not be aware that the Department of Transport and Main Roads (TMR) allow standees for up to 17km. The 17km limit is just past The Boat Place, which means that while there are some standees for the first part of the run, there are no standees from Goomboorian to RB.”

A Translink spokesperson said recent investigations by TMR show that there are currently no students having to stand on any of the buses running from Rainbow Beach to Gympie.

However, they say seating is mandatory for students travelling on school bus journeys longer than 20 kilometres.

Translink advises, “Buses travelling between Rainbow Beach and Gympie are rollover compliant and have sufficient hand grips for passengers who choose to stand.”

“Seatbelts are mandatory on roads designated by TMR as ‘steep’ or ‘very steep’.”

We also received complaints that children did not arrive at school on time, and were home later.

Mr Polley explained their company receives a fee either subsidised or private for each traveller, they are not paid per bus run, “To cancel the fourth bus and fill the 36 available seats on the 131 bus is an economic and efficiency decision that has to be made to keep fares to a minimum without sacrificing safety.”

“As you can appreciate, the logistics are that from the time the bell goes at 3.05pm at James Nash, load 60 odd students and depart at 3.17pm, travel to Gympie High and  connect with buses there and depart GSHS at 3.30pm to be home a little over an hour later I believe is providing a safe and efficient service.”

“You may remember that at the start of the year all RB students had to travel to TCB to join the Gympie buses from there, this was a lengthy process so we changed the run and introduced a fourth bus to speed things up.”

“The recent changes have simply been a return to the original timetable from the beginning of the year as numbers decrease for the end of year.”

As further numbers of seniors finish school for the year, children are arriving back at a similar hour again. Perhaps Polleys could consider reducing services after Year 12 finishes, and not before.

Effective prior communication  – even an SMS alert, would alleviate much of the dissatisfaction the event produced.

Kerri Jordison Makes it a very long day for the students when they’re not arriving home till 4.45pm. Doesn’t make it easy for them if they have after school jobs either

Camille Nash I emailed Polleys but haven’t heard anything back, funny about that. I’m not happy about it at all. We are paying for this service and it’s not good enough! Another thing, it’s putting our kids at unnecessary risk, they should not be standing in the aisle when the bus is travelling at 100km/hr. What happens if the driver has to slam the brakes on?

Jamieson Clark My daughter stands to let the little ones have a seat when they get on .

Geraldine Little My daughter gets home at 4.45pm every day (C/Cove) as it’s the last stop! A bit over a year ago, the bus driver at the time, started alternating the bus route, so that one day she would be home at 4.10pm, then the next day 4.45pm. Maybe Polleys should think about doing this on all bus routes in the afternoon, so every child has a chance of be home at a reasonable time.

Kylie Anissa Betteridge I know if I let my kids stand in the backseat of my car exactly what would happen to me…….

Annamarie Brooklee …. council needs to provide these children with bus shelters. It’s hot! It’s raining! And these kids have to STAND in it as they have nowhere to shelter themselves. ONE at woolworths? Pppfft big deal!

Cassy Hannah If you don’t like it there are other alternatives to using Polleys….  …we could also show appreciation to those service providers who go beyond their requirements by saying thanks instead of complaining.

See https://www.facebook.com/RainbowBeachCommunityNews for the unedited comments.