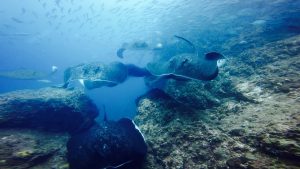 The onset of spring at Wolf Rock means that ocean currents begin to change and start bringing in the warmer waters flowing down the East Australian Current. What this means for us divers is the beginning of seasonal water movement and southerly currents which make for spectacular diving.

We begin to see the numbers of Grey Nurse sharks increasing before the large aggregation numbers commonly seen throughout summer, but more exciting for us are the large numbers of aggregating rays at Wolf Rock.

For the Round Ribbontail Ray (Taeniura meyeni) it is mating season and this means we commonly see ritualistic displays as the males dance and glide past one another in pursuit to impress the standalone female of the group.

Comparatively speaking, little is known of the behaviour, life history and epidemiology of the family of rays (also known as Myliobatiformes) because the vast majority of the 220 known species is nocturnal, which makes studying them relatively difficult.

What we do know is that the 1.5-2-meter diameter Round Ribbontail Rays are benthic predators, feeding on a variety of bivalves, crustaceans, molluscs and bony fishes. They are known as aplacental viviparous, which means that during pregnancy they sustain the young first by yolk, and then by uterine milk, secreted internally by the mother.

Pups are then born in litters of up to seven. Although they have an impressive tail spine designed for defence, they are considered non-threatening and have only been linked to one human fatality throughout the history of their study, preferring to utilise the spine to deter rather than to strike.

Put together, their low fecundity (birth rate), popularity as a commercially fished species and habitat degradation has seen the Round Ribbontail Ray classed as Vulnerable by the IUCN (International Union for the Conservation of Animals).