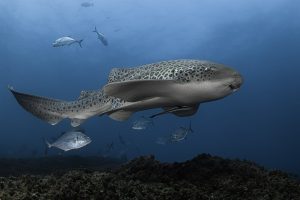 While famous for its Grey Nurse shark encounters, Wolf Rock also plays host to a variety of seasonal visitors. Leopard (or Zebra) sharks Stegostoma fasciatum are a visitor met with enthusiasm and scientific interest.

Leopard sharks are a species of carpet shark that can be seen throughout the tropical Indo-Pacific, frequenting coral reefs and sand flats. While characterised as a shark, they are slow moving, harmless to humans and (in this writer’s opinion) completely adorable.

Leopard sharks are listed as endangered worldwide as they are a target for many international fisheries. Finding sanctuary in Australian waters, Leopard sharks are usually solitary creatures, but have been seen to aggregate from spring to autumn in several sites from here to Byron Bay.

This allows a unique opportunity to study these animals in large numbers, giving researchers a better understanding of their behaviours and population size.

Divers at Wolf Rock assist scientists by taking photo ID pictures. Leopard sharks have unique spot patterns down their sides, and by analysing these, we can identify individual sharks, just like a fingerprint.

Wolf Rock works with researchers around the world to help discover more about these beautiful little critters. Get involved, contact us at Wolf Rock Dive 0754868004 or wolfrockdive.com.au