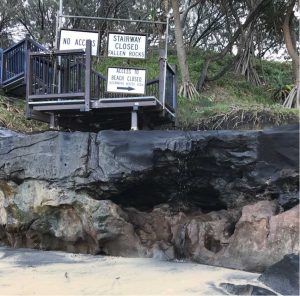 These words are direct from the Council report, and it is not looking promising:

The beach access stairs constructed at the southern end of Phil Rogers Park in 2015 have been closed since early 2016 when the lower foundations partially failed. There were calls at the time to re-open the stairs as soon as possible, although these requests have since diminished.

To progress the viewing platform project and to investigate possible locations for beach access stairs, an engineering consultant was engaged to conduct a geomorphological study.

The bad news is the preference is to not reinstate beach access at Phil Rogers Park.

The path option would be via the old boardwalk and through the sand blow in the National Park.  This would be a lengthy route and would require approval from National Parks and Wildlife, which may not be forthcoming. This option was not recommended.

While the report did not rule out stairs, it clearly identified the risk of regular damage due to wave impact.  Removing sections of the stairs prior to storms or king tides is not practical. The placement of large rocks to provide partial protection is not preferred and, in any case, may not achieve the necessary approvals. The report also discussed safety of people on the beach at low tide with vehicles below the Surf Club.

For these reasons, a pedestrian path could be investigated to connect the proposed viewing platform with the existing beach access near the surf club house. The existing stairs and boardwalk would be removed and useful components salvaged for possible re-use in a future Council project.