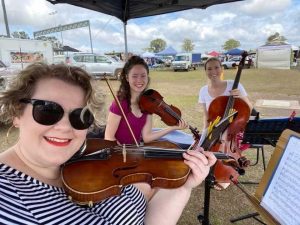 In these uncertain times you have to be an idealist, foolhardy or an incorrigible optimist to go ahead and organise a concert weeks or months ahead.

Organisers of Simply Classical have had their share of trying to overcome obstacles in previous concerts, and it has made them a bit more cautious.

This is why it was this time decided to “keep it in the family” geographically speaking. What was unearthed in their own backyard will nevertheless be a delight for their prospective audience.

The Gympie Strings under the leadership of Alex Pattri have become ever more ambitious and  have done their own unearthing with a movement of Schubert’s quartet op. Nr. 29, no fancy name, and they have their work cut out with this one.

It has a mysterious, almost eerie beginning and then the four different instruments battle it out who has the most to contribute. This is one of several Schubert items, which give the concert its theme: “A Touch of Schubert”.

Another one is a piano sonata by the same composer, played by Hadassah Covert. Hadassah is in her final year of school and heading for grade 8 piano exam, so she will be very well rehearsed.

Alex Pattri and Carmen Smith, who is the conductor of the Cooloola Community Orchestra and herself a superb violinist, are going to play a violin duet and that won’t be a beginner’s piece.

Emma Allan, herself a member of the Gympie Strings, is also the CCO’s principal flautist and is teaming up with a couple of other wind instrumentalists for an item.

“Gift of Song” is temporarily reduced to four singers, without any loss of their artistic qualities, and one of their three items is also a Schubert song.

There will be a speech item again. Well known Gympie identity Gay Lohse will be reciting a poem with a personal history.

One import from just a bit further South is opera singer Louise Findley, who will sing the glorious “Exsultate Jubilate” by Mozart.